Maths man with a box – Doctor Who and mathematics

Beth Graham, mathemagician extraordinaire, looks at the mathematics of Doctor Who. First published in The Tides of Time number 40, October 2017

DOCTOR WHO IS A SHOW WE ALL LOVE, BUT MATHEMATICS IS A SUBJECT MANY HATE. As a Whovian mathematician, both are massive parts of my life, and I want to take the opportunity to show you how Doctor Who’s writers have been putting the science into science fiction for decades. Many mathematician characters have entered the TARDIS over the years: Zoe Heriot, Brigadier Lethbridge-Stewart, Danny Pink and Adric for example. By the end of this article, you will all have earned badges for mathematical excellence.

The TARDIS– how can it be bigger on the inside?

A tesseract is a four-dimensional hypercube. Figure 1 shows a Schlegel diagram of the tesseract which is found by projecting the 4D shape down to a 3D form (in a similar way to how a 3D object casts a two-dimensional shadow), as you can see the shape very much resembles a box within a box. As a tesseract is made from eight cubes being folded together, a successful construction will leave eight times the volume in the same exterior space. Adding another tesseract inside will leave fifteen times the volume in the same exterior space. Iteratively repeating this, it is easy to see how we could get a shape with TARDIS-like volume.

How do you step through an A4 piece of paper? The answer to this problem is surprisingly simple, and I will leave it for you to figure out/google for yourselves but it rests on surprisingly simple mathematical concepts. The aim is to maximize the perimeter of the shape (i.e. how long the boundary of the shape is) whilst keeping the area (i.e. how much physical space there is) constant. Perhaps the TARDIS uses technology that maximizes the area inside whilst keeping the volume of space it takes up constant.

Flatline–living in a 2D world

Whichever way you look at it, dimensions are key to a functional TARDIS- so what happens when they are taken away? This question was explored in the episode Flatline, in which the Boneless are two-dimensional, flat creatures and attack by ‘leeching all the external dimensions’. As Clara discovered, the key to discovering what was happening to the victims of the Boneless was seeing things from a new perspective. Gaining a new perspective on familiar shapes was also a key part of the book and film Flatland which focused on the hexagon Hex living in his 2D world. With the help of a sphere he learns how to visualize 3D shapes in his 2D world, and in doing so we start to be able to visualize 4D shapes. In the same way that Hex will see growing and shrinking circles when the sphere passes through his 2D world, we would see growing and shrinking spheres when a hypersphere passes through our 3D world. Flatline should also gain credit for containing my favourite Doctor Who pun, as the Doctor calls his machine that tackles the 2D Boneless the ‘Two-dis’.

The promotional art for Journey to the Centre of the TARDIS recalls Relativity by M. C. Escher. Escher inspired the great Roger Penrose to invent the tribar. Penrose wanted to create a structure whose parts made sense individually but, when joined, became ‘impossible’, which he found in three mutually perpendicular bars which appear to join to form a triangle, see Figure 2 (left).

Tracing round a Penrose tribar gives a four loop Möbius strip, which is an example of a non-orientable manifold. Written in mathsy language, each point of an n-dimensional manifold has a neighbourhood that is homeomorphic to the Euclidean space of dimension n.

Happily there’s an analogy to hand. Consider the Earth as a perfect sphere. We only know that the Earth is a sphere because we are constantly told as such by science. If you stand in a field, it looks flat. To word it another way; locally, the Earth is flat. In maths terms, the sphere is a two-dimensional manifold and has the local topology of a plane (which is 2D). A manifold is non-orientable if when walking on the surface your path brings you back to your starting point but mirror-reversed. A Möbius strip is an example of such a surface, and is created by putting a half-twist in a strip of paper and then sticking the ends together.

To help visualise why a Möbius strip is non-orientable, imagine that you are standing on the surface of a Möbius strip. Put a place marker at your starting point, wave your left hand and start walking straight forward. When you return to your starting point you will go to wave your left hand again in order to discover that is it your right one. Hence, you have returned to your starting point but mirror-reversed and the Möbius Strip is non-orientable. The classic corridor scenes where one leaves on one side only to return on the other suggest that maybe the TARDIS has a network of Möbius strip corridors. Furthermore, maybe the humble Möbius strip inspired the name of Morbius, the denounced ex-head of the High Council of Gallifrey?

In Heaven Sent, the Twelfth Doctor is trapped in a castle. Once he smells the sea air from a window, he has to make some quick calculations in order to time his fall to perfection. Figure 3 shows an e-mail sent between members of the production team (and made public by director Rachel Talalay in 2017) highlighting the kinematic (suvat) equations. These equations govern how displacement, initial and final velocities, acceleration and time interact and were used to discover the duration of the Doctor’s fall.
I used these equations and data revealed in the script to calculate the height of the tower in the show. From timing the fall and knowing that the acceleration due to gravity is equal to 9.81m/s; I found that the Doctor jumped a height of 314m, just 10m shorter than the height (to the tip) of the Eiffel Tower. 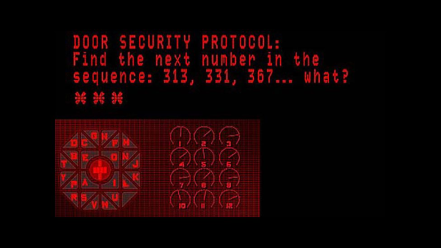 42: the answer to life, the universe and everything. It was also the first episode of Doctor Who written by Chris Chibnall, back in Series Three. 42 is set in near-real time, as the crew of the SS Pentallion work alongside the Doctor to save their ship. Figure 4 shows a security screen detailing a problem that the team must solve in order to unlock an escape path. The solution is hidden in recreational mathematics, which no-one does much to the Doctor’s despair, and happy primes. Any number that reduces to 1 when you take the sum of the square of its digits and continue iterating that process is called a happy number. For example, 19 is a happy number: 12+92=82, 82+22=68, 62+82=100. We know that there are infinitely many happy numbers because if 1 is happy, then so is 10n (i.e. 1 with however many zeros you want after it). A happy prime is a number that is both happy and prime, a prime number being a number where only 1 and the number itself divides it nicely. Knowing this we can see that the next number in the sequence is 379.

Full Circle–procrastination and the coordinates of time and space

I consider Full Circle to be an ode to procrastination, something that university students are guilty of doing on a regular basis. It is also where we first meet our mathematical genius, Adric, and where the Fourth Doctor bid Romana ‘Set a course of binary coordinates 10 0 11 0 0 by 02 from galactic zero centre’ with the intention of reaching Gallifrey.

Coordinates systems are something we are all intuitively used to; forwards/backwards, left/right, up/down are the instructions we use to navigate the world as if it rests on a Cartesian plane. However, these are not the only instructions we could use. Polar coordinates work by saying from your starting point move a distance r out and then walk so that you make an angle theta with the base line. We also have parabolic and spherical polar coordinates.

Doctor Who is famed for nonsensical scientific jargon so you can imagine my surprise when upon researching for this article I discovered that mathematicians actually do use binary coordinates. Binary numbers are numbers written in base 2. We usually work in base 10, so that as you move from right to left, each digit in the number is represent how many of that power of 10 we have: the 1s column, the 10s column, the 100s column etc. In base 2 it is the exact same but instead of powers of 10 we work in powers of 2 so we have the 1 column, the 2’s column, the 4’s column etc. For example, in binary the number 19 (1 ten and 9 ones) becomes 10011 (1 sixteen, 0 eights, 0 fours, 1 two and 1 one). We use this relation between binary and base 10 in binary coordinates. If we have a square array of dots and label each dot with a whole number, we can convert those numbers into binary form and then rearrange them using a linear transformation which switches around the digits in the binary number. Converting back to base 10 will show where the dots in the array have been moved by the linear transformation. Using binary coordinates is a useful way of describing objects and how they change when we apply transformations to them. This is a horrendous simplification of some very complicated maths, but I hope you can see that they can be very useful.

I could continue this article forever but will end with a word about Time Heist. In this episode, the Doctor has the unenviable task of trying to rob the safest bank in the galaxy. The bank is guarded by a telepathic creature called the Teller who can instantly detect if a person entering the bank has the intention of robbing it. It is because of this that the Doctor cannot simply warp in using the TARDIS and then warp out with the swag.

Thinking of this problem from a different perspective gives us (and writers Steve Thompson and Steven Moffat) the solution. It transpires that it is just another version of the ‘Crossing the River’ problem. In this case the Teller is the wolf, the Doctor is the goats and the stash is the cabbages. In the problem we carefully row the boat backwards and forwards (I bet most of us have done so whilst playing Professor Layton), but in the show the solution replaces each crossing of the river with the Doctor and friends remembering a part of the plan and undertaking the appropriate action. As no-one knows the entire plan at once they can’t be caught for having criminal intent.

A reward for readers

So, from the TARDIS to Time Heist, I hope you can see that the mathematical secrets of Doctor Who are also bigger on the inside. If you want to find out more about recreational (and not so recreational) mathematics, I can highly recommend the Numberphile YouTube channel but for now I shall leave you with your badge of mathematical excellence. Well done!