The first part of a series on alien biology in Doctor Who by James Ashworth, based on his EPQ (extended project qualification) and first published in The Tides of Time number 39, June 2017.

The Time Lords appeared in Doctor Who at the very beginning. The Doctor is a Time Lord, as (unless we are given evidence to the contrary) we presume was his granddaughter Susan. At the end of the second season the TARDIS occupants met another member of the Doctor’s race in the form of the Meddling Monk. However, the Doctor’s people were not explicitly called Time Lords until The War Games in 1969. They are, of course, the most prevalent aliens appearing in Doctor Who, featuring in every episode, except Mission to the Unknown, in the form of the Doctor. Despite their outward physical similarity to humans, they have some radically different attributes.

I’ve only got one heart working. How do you people cope?
—The Shakespeare Code 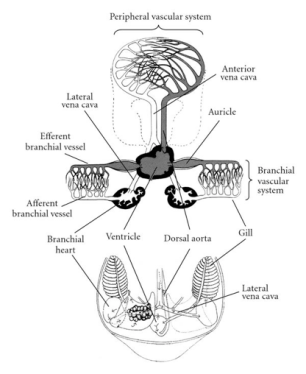 One of these attributes is the Time Lords’ binary vascular system, or having two hearts. Certain animals, such as octopuses, have multiple hearts, though not as we know them.
Whereas in humans the heart has four chambers, an octopus has two branchial, or gill, hearts, that are single chambered and pump blood to the gills and back to the main heart from the vena cava (the main vein), and a main heart, with two external atria attached to one large ventricle, that pumps blood to the body. In essence, these hearts all do the same
job as one human heart, but an octopus distributes the same roles across multiple
smaller hearts. Except in conjoined twins, humans and other mammals don’t naturally have two hearts, which presumably is an evolutionary advantage, as it takes more energy to operate two hearts and one heart is sufficient. But there are some people with two hearts. In cardiomyopathy, the left side of the heart is weakened, and blood pressure builds up in the lungs as it enters faster than it leaves. In this case, a heterotopic heart transplant may be performed, where a second donor heart is grafted onto the first, to aid it in pumping. The original heart mainly pumps to the lungs whereas the stronger donor heart pumps blood around the whole body. Another similarity between the use of hearts in octopuses and Time Lords is that one pump can function on its own for a short amount of time. This is similar to an octopus, in the fact that its main heart undergoes cardiac arrest when startled or mating, but its two branchial hearts are sufficient to continue to circulate the whole system.

Life depends on change and renewal.
—The Power of the Daleks

Another, and probably one of the most well-known abilities of the Time Lords, is regeneration. The programme and the texts surrounding it have offered many explanations for this, from exposure to the time vortex, genetic experimentation by Rassilon and finally, triple helix DNA. This last theory comes from The Crystal Bucephalus, a Missing Adventures novel, so while it’s not part of any television canon, let’s run with it.

Triple helix DNA is actually possible, as is quadruple strand DNA. It is formed by Hoogsteen base pairing, where rotation around a glycosidic bond (the bond between a carbohydrate and another substance), as well as flipping the purine base of DNA, allows for an alternative set of hydrogen bonds to form, in addition to the normal set. A third strand can then lie in the major groove of DNA, where the sugar phosphate backbone is at its furthest distance away from the next part of the helix. This happens as long as the third strand has a high amount of cytosine or thymine when adjacent to the purine strand (guanine and adenine) or a high amount of guanine or adenine when in the opposite direction to the pyrimidine strand (cytosine and thymine).

Triple helix DNA is either short, in H-DNA polymers, with only one DNA molecule involved, or much longer if two are present. At present, their roles are thought to be that of regulating gene expression, by either preventing the binding of a transcription factor, that stimulates RNA polymerase to form a complementary strand to the DNA, or by blocking its path once it has started by binding downstream of DNA. However, it is not at present thought to code for anything.

I was dying. To save my own life I changed my body. Every single cell, but… it’s still me.
—Born Again 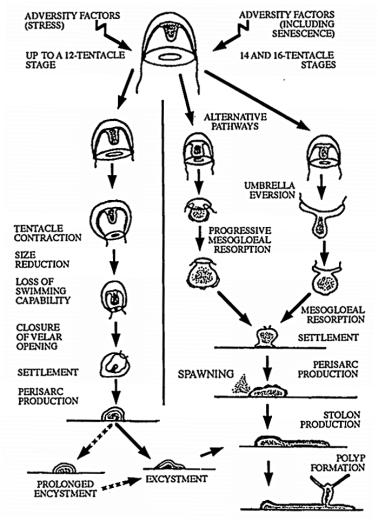 But can creatures actually regenerate? Yes. One of the only, and certainly the largest creature that can do this is the immortal jellyfish. It can fully regenerate by using the process of transdifferentiation, where its cells may spontaneously change to another type of cell. As a medusa, the typical adult jellyfish, the tentacles and bell contract and die, while some of the tissues of the exumbrella, the upper surface of the jellyfish, transdifferentiate into those that can secrete the perisarc, made of chitin and protein, which protects it as a polyp while the radial canals (part of its digestive system) aid the
transformation. It sinks to the ocean floor where its life cycle then begins again.

Stem cells, which can differentiate into any other cell type, are also thought to be involved. Mammal cells cannot be regenerated naturally, but can be artificially. Placing an adult cell nucleus into an unfertilised egg allows for it to become pluripotent again, by removing factors and markers, and this forms the basis of most modern cloning, like in Dolly the sheep. However, this doesn’t change all of the cells in the body at once, like in regeneration.

Another method involves directly removing epigenetic markers and factors. Epigenetics cover environmental factors, like the way DNA is wrapped around histone protein, as DNA between proteins can’t be ‘read’ by the cell. Other ways include repressor proteins, that bind to DNA and prevent transcription, and methylation of DNA, which, when binding, can activate and repress genes. It is important to note that no change occurs in the DNA sequence, just in how it is read. It has been shown that lifestyle can affect epigenetic markers. A study of fat and thin men showed that there were thousands of differences between epigenetic markers in the sperm of the different types of men, and this change was reversed after weight loss. However, finding and removing these factors artificially is incredibly difficult, and the changes they cause may be permanent in most cells, so more research is needed to find if it could be possible.

Overall, the use of regeneration in the programme is actually reasonably realistic. While the Time Lords do not revert to babyhood, their cells do transdifferentiate directly to another state, even if they do not change cell type. The regeneration of the immortal jellyfish wasn’t even discovered until the 1990s, decades after the concept entered the show. The explanation of triple helix DNA is also plausible, and it could be possible that this triple helix DNA is responsible for regeneration by allowing the expression of genes responsible for regeneration when dying, and keeping them suppressed for the rest of the time. Even the statement that a Time Lord can only regenerate twelve times could be explained by degradation of this DNA, as errors accumulate when cells change. However, the realism is hampered somewhat by features like the changing of eye and hair colour, which are solely genetic factors. This would suggest DNA is changed during regeneration,
which it certainly is not in transdifferentiation or by epigenetic markers. Also, a Time Lord can actively resist regenerating by thought, like the Master did in Last of the Time Lords, which would not be possible, at least on Earth. The immortal jellyfish begins transdifferentiating in response to stress, including ageing and attack, and cell metabolism cannot, as far as we are aware, be altered by willpower. Regeneration in Doctor Who is used intelligently, albeit with some large caveats when it comes to credibility.