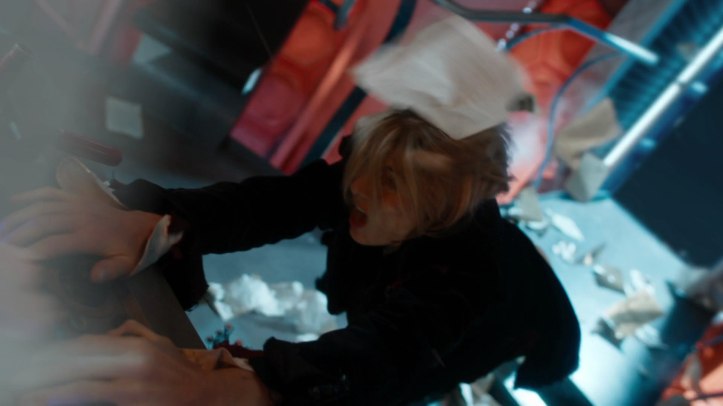 In a short  article first published in The Tides of Time number 42 in November 2018, Matthew Kilburn considers how the development of the Thirteenth Doctor was presaged by the symbolism of her arrival scene and its relationship with the trappings of her predecessor.

Learning and the accoutrements of knowledge weigh heavily on the Twelfth Doctor. By the end of his first episode, he’s already fitted out the upper gallery of the TARDIS control room with rows of books and a blackboard. Books and bookshelves protect the Twelfth Doctor’s inner life. In Robot of Sherwood, he lurks amidst them eating yoghurt with a childlike guilt, as if his covetous licking of a spoon is proof that he is not a good man. Later, reading is possibly an indicator of the Doctor’s entering a dream state, as he has a book in his hand when Santa Claus knocks on the TARDIS door and interrupts the closing credits of Death in Heaven. Ashildr/Me’s emulation of the Doctor includes her library, dominated by her own diaries, recalling the Fifth Doctor’s “A man is the sum of his memories, you know. A Time Lord even more so.” (The Five Doctors)

The transformation of the Twelfth Doctor into the Thirteenth sees the Doctor’s books either consumed in flame or cast to the winds above Sheffield. The new Doctor proves to have “empty pockets”. The introspective reader and guitar player has become a practical woman who applies knowledge, recalled from fragmentary experience rather than complete works, or gathers it on the fly. The institution this Doctor would gather around her would be different from the Twelfth Doctor’s St Luke’s. Instead of the poetry of physics and the universe as absurd abstraction, the Thirteenth Doctor would probably talk about helping people while making free with a blowtorch. Like the First Doctor in The Aztecs, she’s an engineer, a builder of things, but with added kindness. However, with the old monsters has gone a sense of security in old learning. The Thirteenth Doctor has been betrayed by incomplete knowledge in Demons of the Punjab and Kerblam! Salvation and identity come from discovering information and making new tools.

Instead of studying precedents and soul-searching about what it is to be a hero in one’s own life, the Doctor now finds her heroism in other people and in small decisions. If the last Doctor worked out what it was to be the author of one’s own and others’ stories, this one is interested in the best possible collective narrative, and that means disparate voices and far fewer grand gestures. Binding them on a shelf would be too limiting and a spirit of anti-discovery. She’s someone who has renounced Godlike presumption to become “a stranger on the bus, trying to make [her] way home,” (in the words of Eric Bazilian’s song recorded by Joan Osborne, One of Us) and content with small victories. I miss the tortured authority of the Twelfth Doctor, but am intrigued to see how much more evidence arises for my reading of the Thirteenth Doctor.

Tides 42 is, at time of publication, available to buy through this link