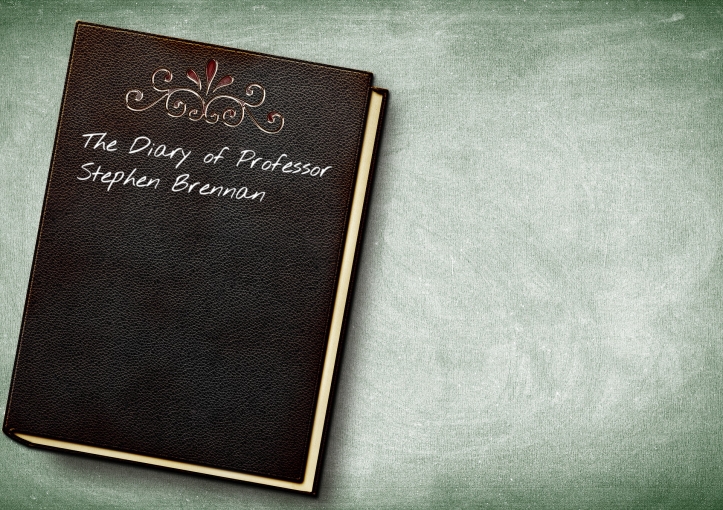 Image Description: A book, whose cover reads “The diary of Professor Stephen Brennan”

From the diary of Prof. Stephen Brennan

Before we begin the review, I have a confession to make. I am a New Adventures Fan. I love these books so much, including all of their characters, their history, their fanwank: l love every bit of it. Being a fan of the New Adventures can be tough in this day and age. They’re often seen as an embarrassment: the teenage puberty years of Doctor Who, that people would rather quietly push under the rug. And, due to their relative unavailability, fewer and fewer people can actually claim to have owned, let alone read, these tenacious tomes. And those who haven’t tend to pour on the most scorn of all.

Now, why am l telling you this? Well, dear reader, all this is crucial context for just how important, and just how damn magical this book is. Bookwyrm covers the entire 61 book run of the New Adventures (with a brief interlude discussing Steven Moffat’s Short Story Continuity Errors, published concurrently in Decalog 3), and whether you’ve read none or all of them, this is a book for everyone.

To any Wilderness Years fan, the names Anthony Wilson and Robert Smith? are well-known.

A sheet of paper torn from a notepad – scrawled on it: The Editors

For any concerned readers, the ? is meant to be there – Tides doesn’t make mistakes!

If Stephen can rip off Bernice Summerfield’s Diary, then so can we

Smith? is the Webmaster and Editor-in-Chief of the Doctor Who Ratings Guide, a fantastic website where anyone can contribute a review of anything in the vast pantheon of Doctor Who Stories, in all mediums, where the motto is “By Fans, For Fans”. And together, Wilson and Smith? run the website Cloister Library, a website which chronicles every continuity reference in every Doctor Who book ever, as well as a mini-review of each one. We’ll come back to these websites later, but for the moment, if you haven’t already checked out these websites, and you’re interested in Bookwyrm, you should do so at once! I’ve been a regular visitor to both sites for several years. As the authors themselves say in Bookwyrm: They all stand alone, but they compliment each other.

From the Diary of Prof. Stephen Brennan

From the moment l was told about Bookwyrm, l was sold. The idea of a guide that covered the New Adventures in depth, by two people who knew their stuff, sounded like a dream come true! And l’m glad to say, Bookwyrm far exceeded my expectations! Wilson and Smith? clearly have such a love for this era of Doctor Who, and every paragraph has humour and warmth pumped into it. Reading Bookwyrm is more like sitting in on a conversation between two fans than reading a 400 page book, in the best way possible. And, considering just how much the New Adventures themselves very heavily draw on influences of fan-culture at the time, this only serves to make Bookwyrm feel even more like a love letter to the New Adventures. However, it’s not just NA Nuts who’ll appreciate Bookryrm; everything is written accessibly enough so that even someone with no knowledge of the New Adventures can enjoy it, and maybe even consider picking one or two up! Whether you can name every character in Transit, or can’t name the books in the Timewyrm saga, this is a book for everyone. Beginning this review, l had only intended to read up to Nightshade, but l ended up finishing the entire thing in one sitting! It’s THAT well-written.

As with all things, Bookwyrm is not perfect. As mentioned earlier, both authors are responsible for the wonderful Cloister Library. However, as someone already intimately familiar with the site, certain parts of Bookwyrm feel a little… too familiar. In the review sections in particular, a lot of the same wording is used both on The Cloister Library, and in Bookwyrm. As both authors give their thoughts on the books in Bookwyrm, and only one does so on Cloister Library, the “Main” review in Bookwyrm is always by whichever author didn’t write the one for Cloister Library. It isn’t a huge issue,and certainly not one that most people would even be aware of, but it is worth noting. Also, although the book stays factually accurate throughout, there is one glaring error, that l feel obligated to point out. In the section where they discuss Lungbarrow, Wilson and Smith? state categorically that “Since Lungbarrow, precisely no Doctor Who, in any form, has mentioned the Looms, the Doctor’s family, his involvement in the Old Times, the existence of the Other or anything else implied here.” No matter what way you slice it, this is blatantly false information, and l’m honestly surprised that such a huge mistake made it through to the finished text. They even mention some of these future references earlier in the book! I won’t go into detail on them here, as l already wrote an essay for Tides about this very topic.

Another piece of notepaper from The Editors

See ‘Looming Large’ in #41 – Available to order in limited amounts!

I love Bookwyrm. Yes, l have one or two nitpicks with it, but that’s all they are: nitpicks. I enjoyed every moment of reading it, even if l didn’t always share the same opinions as the authors (I mean come on, All-Consuming Fire is easily one of the best NAs!)

The note trails off. You are initially confused, but a knock at the door distracts you. Opening it, you find the  postman, with a letter addressed to you. Apparently, it’s been kept waiting for you since 1887. It reads:

If my deduction is correct, as it always is, then this letter will reach you just in time for me to relate that I, Sherlock Holmes, and my assistant Watson, appeared in The Case of the All Consuming Fire, to lend The Doctor a hand. After his hopeless imitation of me (Though to this day, some still mistake me for him near the Palace Theatre), it was only right that I lent the poor fellow a hand. My associate Stephen is correct in the assertion that it was one of Conan-Doyle’s more entertaining summaries of my work, even if the truth is far too shocking to relate.

P.S – Look behind you

You turn around, to see a stack of post-it notes you’re sure weren’t there a moment ago.

but that’s part of the fun of Bookwyrm. Best of all, it reminded me of exactly why l love the New Adventures so much. In a time when Doctor Who was off TV, they took The Doctor to places they’d never been before, and while there were a few bumps in the road, it worked out in the end. I heartily recommend that every Doctor Who fan should pick up Bookwyrm, as an insight into one of the most often-overlooked and neglected eras of the franchise. I shall look forward to the next Volume in the series, covering the BBC Books Eighth Doctor range.

Bookwyrm is the perfect book for any book worm.

From the Diary of Prof. Stephen Brennan

If Benny can pretend to be a Professor, then so can I.

There’s another knock at the door. An official looking envelope comes through the letter box. You open it, and the letter inside reads:

I’ll see you in court.

You hurriedly throw the notes into the fire…

Tides 43 is, at time of publication, available to buy through this link