Doing it for the kids – The Secret in Vault 13 reviewed 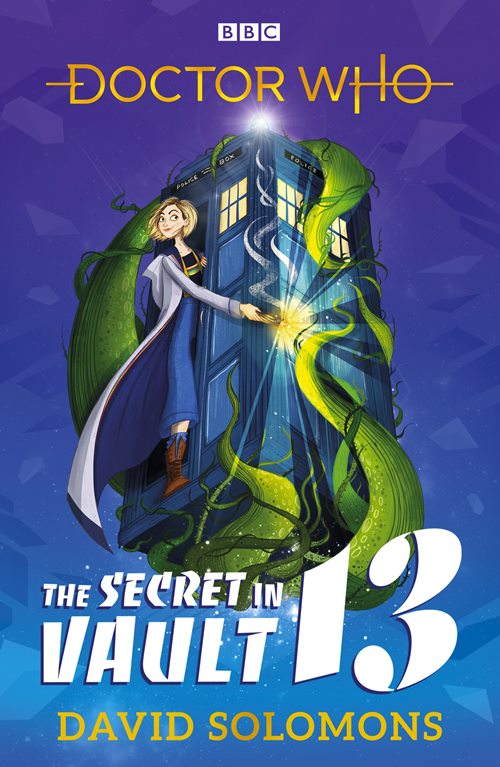 It is perhaps a mark of the strangely blinkered nature of Doctor Who fandom, that the prospect of ‘a Doctor Who book for kids’ seems counter-intuitive. With the BBC Books line dominated by writers who’ve been knocking about since the 90s, with photo-montage covers suggesting a mild embarrassment at being prose rather than bona fide television, it’s easy to lose sight of the fact that the primary audience for Doctor Who, in all media, is kids.

In this context, The Secret in Vault 13 comes as something of a surprise. Written by screenwriter and children’s author David Solomons, notable for the My Brother is a Superhero series, with a cover by children’s author and illustrator Laura Ellen Anderson, The Secret in Vault 13 positions itself unambiguously as children’s fiction. (To the point where I first found it in the ‘Children’s 8-12’ section of Waterstone’s, rather than shunted awkwardly at the end of the ‘Science Fiction and Fantasy’ section alongside Molten Heart and The Good Doctor). To some extent this appearance is misleading; beneath its shiny cover lies a work every bit as fannish as the excesses of Panini Comics. But there also lies a witty, fast-paced and imaginative children’s adventure story, and a breath of fresh air for Doctor Who’s literary output.

The book’s structure is largely episodic, with an overarching save-the-universe plot facilitating a host of smaller adventures. The first chapter (charmingly titled ‘Diddly-dum Diddly-dum Woo-woo’) introduces the TARDIS fam cleverly deposing an evil space dictator, before Graham’s potted plant delivers a message for the Doctor from the Gardeners of Tellus. Our heroes travel to the Gardeners’ world, where the native sentient tree-people tell them the prophecy of the mysterious Vault 13, which contains a deadly weapon sought by the villainous Nightshade. Our heroes must recover the three keys to the vault, scattered across time and space, before the Vault is opened and Nightshade can use its contents to ‘turn the soil’ and wipe out all life in the universe. The setup here invokes classic Doctor Who quest narratives like The Keys of Marinus or The Ghost Monument (and the book even references the Key to Time). But in tone and style the book is most reminiscent of classic TV Comic or Doctor Who Adventures comic strips. Like those strips, the book has a great sense of forward momentum, rapidly changing location every few chapters as it romps through a series of madcap set-pieces well beyond a television budget. Also like those strips, this results in a series of captivating images and scenarios, from a giant mole lurking beneath Kensington to a mad boarding school in outer space, none of which stays long enough to wear out its welcome. Even as parts of the book slow down to allow character beats or more introspective moments, none of them stick around long enough to bore a younger audience.

This profusion of cool images contributes to a larger strength of the book, which is its distinctly child’s-eye view of a Doctor Who adventure. The inclusion of gadgets like a Google Home-style holographic Doctor (activated by saying ‘Okay, Doctor’) and the characterisation of Graham as making ‘Dad jokes’ feel like elements which will delight a tech-and-internet-savvy children’s audience, while the chapters dealing with an evil boarding school (‘where graduation means death’!) tap into more primal childhood fears. The detail that the pupils are controlled with school ties that tighten and choke them if they disobey orders feels perfectly calibrated to resonate with rebellious kids, as does the depiction of the school’s robot nurse, M8- Tron. At one point M8-Tron dopes Ryan in a scene that will hit close to home for any child who has attempted to pull a sickie:

Ryan attempted to break free, but M8-Tron’s grip was too strong. He tried a different approach, attempting to protest that he felt fine actually, but all that came out was a gurgle. He could only watch as a drawer slid out of the robot’s middle, and two more arms dipped into it then reappeared. One held a large brown bottle, the other a silver spoon. The robot carefully measured out a dose of gloopy pink liquid, then raised the spoon. There was the whir of actuators, and Ryan felt metal fingers prise his lips apart. “Open wide.’’

While scenes like these will undoubtedly resonate with kids, there are also a number of satirical touches to please the adult reader. Particularly memorable are the chapters set in Kensington, where Graham reflects that ‘Half of the houses round the square were empty, their international owners rarely there to occupy them. They were investments, not places to live.’ These initial barbs give way to the revelation that the square is run by a Wicker Man-style cult, which makes human sacrifices in the name of ‘splendid houses… affordable council tax, convenient residents’ parking, and the wonderful amenities of the borough.’ It seems that alongside the madcap fun of Doctor Who Adventures, Solomons has added a touch of the early 2000AD-inflected Doctor Who Magazine strips. On top of these satirical antics, the book includes a number of touches for the adult reader that one could call fanwank, were it not too rude for any children who might be reading. This is partly on the level of references; the aforementioned cult is led by a ‘Mr Delgado’, and there are explicit references to The Leisure Hive, An Unearthly Child, and a bevy of recurring monsters. But beyond these simple references, entire sequences feel consciously recycled from the show’s past, such as when Yaz is involved in a Virgin New Adventures-style odyssey through the mind of the TARDIS. While the occasional off-hand reference can provide a cute Easter egg, the more allusive sections are probably the book’s major flaw. The story includes a needless detour to Coal Hill School, and the entire chapter Yaz spends running through a corridor while a TARDIS construct of Ryan simply lists old monsters is easily the weakest part of the book.

But while Solomons perhaps gets a bit too wrapped up in the letter of the old show, he pleasingly remembers the educational spirit of the early series. The book concludes with a visit to the Svalbard Global Seed Vault, and provides a few titbits to prompt the curious reader to hit Google once the book is done. This is a savvy move, echoing similar moments in Series Eleven such as the endings of Rosa and (to a lesser extent) Demons of the Punjab, and indicating that for all its madcap comic book antics, The Secret in Vault 13 belongs firmly to Doctor Who as it lives now. And, indeed, continues to live; the book ends on a cliffhanger, seemingly promising further adventures to come. While the beat itself might feel anticlimactic, it is hard not to relish the prospect of more adventures in this delightful flavour of Doctor Who prose.

Tides 44 is, at time of publication, available to buy through this link