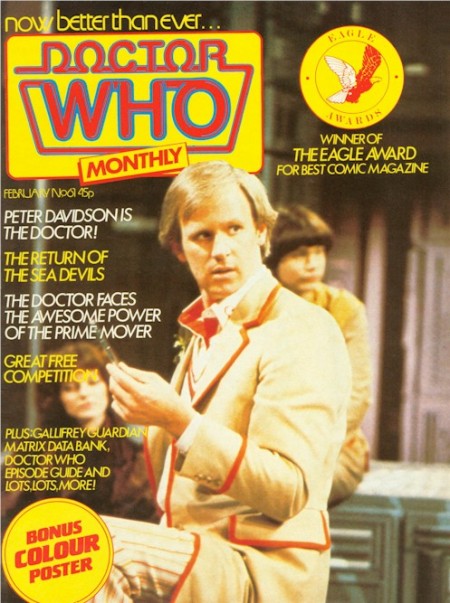 Image Description: The cover of DWM #61, in which ‘The Tides of Time’ debuted

“The Journey has not ended here, for his spirit claimed, by death-knell’s chime, lies waiting still, to cross once more a sea of stars, and sail The Tides of Time.”

In seeking out this magazine, you are, of course, already a person of culture. As such a person, you will be aware of the rich history of non-televised Who, of which this magazine plays a part. Indeed, you may not be aware that we share a name with a comic published in DWM. In order to ensure quality for our readers, and mark the thirtieth anniversary of this publication, your humble Editor has tracked down a copy of the story. Should we stick with The Tides of Time, or go with something else? The World Shapers perhaps…

But before we get into the story, let’s first take a quick look at the background. ‘The Tides of Time’ was published back in the double digit days of DWM, issues 61-67 to be exact, and featured the first instance of the Fifth Doctor venturing into its comic pages. Since then, it has been reprinted a number of times, in both its original black and white and also in several different coloured editions. These reprints have taken place across both time and space, be it in Marvel’s comic compilations, Doctor Who Classic Comics (the edition I’m using) or as a graphic novel.

The story gets off to a dramatic start. During a game of cricket, the cricket ball switches place with a grenade, thrown in training on the green some forty years earlier. From there, events escalate as a Roman soldier attacks, while the Doctor is chased down by a knight on horseback. This typifies the story as a whole, which takes the kitchen sink approach to storytelling by gradually throwing more and more into the story. Strangely, this works. The Doctor sent on an Arthurian quest by Rassilon, Bedevere, the Thane of Kordar and to remove any doubt, Merlin? Yep, that works. Sequences inspired by The War Games and The Chase? Sure! A race of beings inside a white hole with the power to reverse the flow of time? But of course. It may not be your thing, but the escalation somehow manages to keep things engaging despite, on a more basic level, not really making too much sense. The ability of the story to take terms like The Chronometer of Absolute Time, (it has to be in bold) and phrases such as “I believe we relate to our environment in a unique way!”, in its stride is testament to that. So story wise? A solid tick.

Next up, the characters. Here, the picture is mixed. The assassin Shayde is certainly the best. A being conjured into existence by the will of the Matrix Lords, Shayde at first subtly influences events, but as the story continues to escalate, they are forced into greater action until manifesting in reality. A character of few words, their basic design ensures that their intentions remain a mystery until the story requires it. Helping the Doctor alongside Shayde is Sir Justin, the aforementioned knight, who supplies the physical combat in the story. He’s somewhat bland, and rather too accepting of the alien worlds he visits, but an altogether serviceable character. The villain of the piece, Melanicus, can’t even aspire to this, having the dual problem of not being in significant portions of the comic and being significantly underdeveloped, generally putting in the odd appearance to roar a bit before vanishing off. The amount of incident means that this can be glossed over to some degree, but Steve Parkhouse’s writing still doesn’t hide the rather abrupt ending of Justin dragging Melanicus off a church tower. Character-wise then? Passable.

The art is also something of a mixed bag. The scenery is terrific, taking in the Capitol on Gallifrey, space and even a humble village green in great detail. The abstract nature of the story also gives some great visuals, such as the TARDIS being sucked down the plughole alongside a giant rubber duck. While Dave Gibbons can clearly draw environments of many kinds, his depictions of Peter Davison leave something to be desired (see adjacent). While it was the first Fifth Doctor story to feature in DWM, it’s still some way from perfect. Some of the colouration in the print edition I was reading (Doctor Who Classic Comics 10/11, published in 1993) is also somewhat peculiar at times, especially when the TARDIS is on Earth. While the bright, vivid colours might work in space, the blues and oranges on Earth drag you out of the story somewhat, while you try to process exactly what you’re seeing.

In all, ‘The Tides of Time’ is eclectic, stuffed to the hilt with a variety of ideas, and a riot of colour. The comic is pretty good as well. While it’s not a Fifth Doctor story in the traditional sense, especially without the large TARDIS crew, it makes up for it with a glut of ideas that keep things ticking over. Therefore, I see no better comic strip to represent the Oxford Doctor Who Society, and the variety of interests we have in our favourite show.