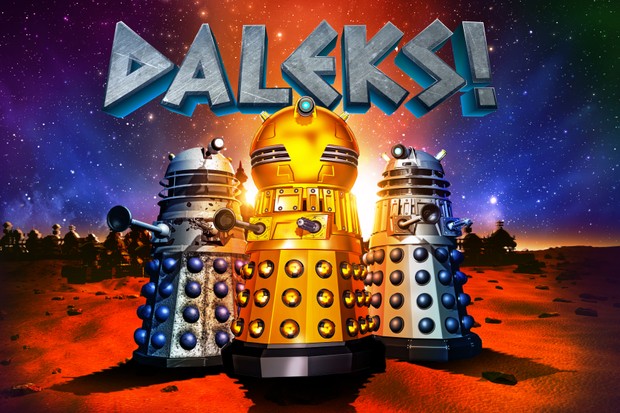 With the Daleks now totally reduced to the pair of Emperor and Strategist, and a re-watch of Episode Two confirming the death of the Executioner in a planetary explosion, their strategy of luring the mysterious Entity to the home of the Mechanoids is put to the ultimate test when its attack begins.

Our focus is split between two different pairs: the Dalek Emperor and Mechanoid Queen, who continue to snipe and moan and generally be unpleasant to each other, and the Dalek Strategist and red scientific Mechanoid 2150, who work together far more smoothly trying to find a solution to their joint problem.

The Emperor’s egomania here is really quite astonishing, as he happily watches hundreds of Mechanoids sacrifice themselves to hold back the Entity, then deems them failures when they perish. However, he later proudly declares himself the last Dalek, having apparently forgotten his trusted Strategist entirely! It’s no wonder the Mechanoid Queen quickly tires of him, and constantly questions whether to simply hand him over to his foe.

The decision to bring back the Daleks’ greatest foes and force them to work together continues to pay dividends. The team-up allows for both the pleasing visuals of huge armies and retro sci-fi design, along with the kind of robotic smack talk last seen in the classic Dalek-Cyber showdown of 2006’s Doomsday. It makes for an entertaining mix, the kind of shallow but enjoyable content that’s perfect for the short running time of each episode, though I doubt it would hold my attention as well if all viewed in a single sitting.

As we head towards the final episode, it looks like the Daleks (all two of them!) may have solved one problem by causing another, and the sparks of animosity between the Emperor and Queen may finally erupt into all-out war! Good luck to the Daleks, I say. Goodness knows they’re going to need it!