The Tides of Time, issue 36 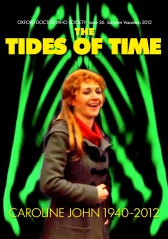 I’m pleased to report that there is a new issue of The Tides of Time, issue 36, on its way to being distributed to Oxford-resident members of the Oxford Doctor Who Society shortly. It can now (we add much later) be downloaded as a PDF. It is cover dated Summer Vacation 2012, and Adam Povey remains editor, assisted by John Salway.

The cover montage is by Matthew Kilburn.

This is a 40 page A5 issue, possibly rolling off laserprinters at a secret location even as I type.