‘So they think that I am going to explain why the verb “to Tides” should exist. But I’ve beaten them.’ 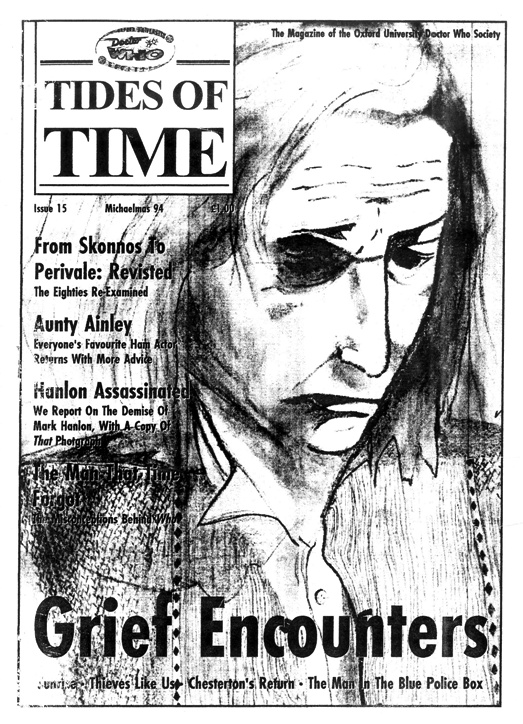 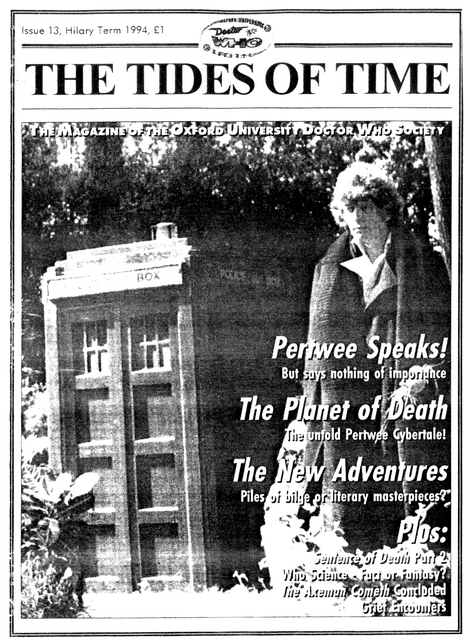 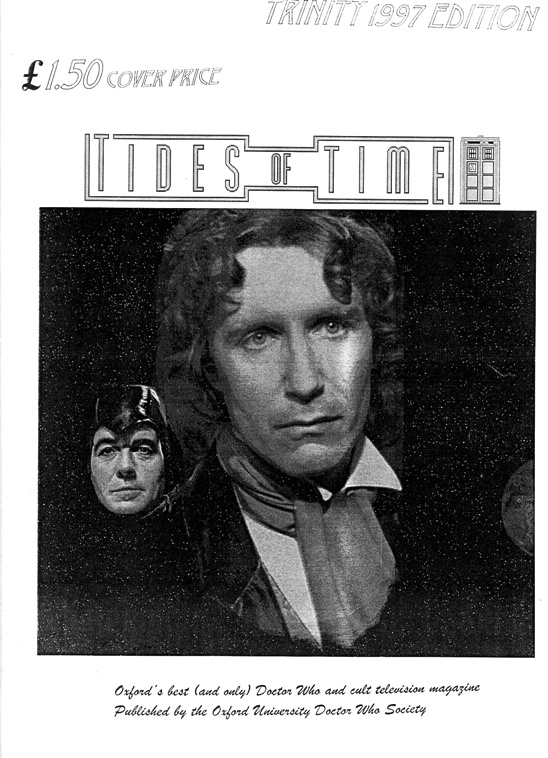 I’ve added a few more full issues of Tides of Time to the online archive, dating from the 1994-1997 period. They are some of the larger issues published, with the size of most of the files ending up in the 20-30Mb range. They tell of the rise of fiction writing in the society, of the improvement in laser and inkjet printing and of photocopying, of the 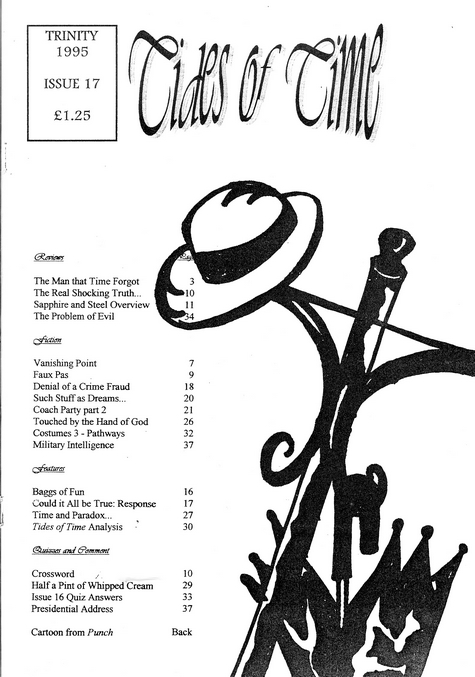 occasional internal squabble, and of multiple fan perspectives on the different paths off-air Doctor Who was taking in the 1990s, Somehow there is no great review of the TV Movie – Tides disappears for a year and then McGann is clearly established in the imagination of the writers as the current Doctor. I was a bit effacing about the contributors to Tides last time – the regulars or editors in this period include those who will become a novelist, a campaigning journalist, a churchman commended for his communication skills and many other talented people including someone hailed as the most underappreciated Doctor Who non-fiction writer.

Tides 13 (Hilary 1994) – madness and profanity abound as parody escalates, speculation and investigation of the missing episodes concludes, and Virgin’s New Adventures series continues to explode some established fan nostrums and cultivate others into exotic new forms explored in these pages.

Tides 14 (Trinity 1994) – exam season is upon us and this brings the Second Public Examination in Doctor Who. “‘A barely adequate substitute for a visit to a concert or music hall.’ Is this a fair description of the mighty Sontaran battle fleet?” A mother confesses the trauma of having a fan son, the Mara stories are dissected and there are quotes, in-jokes and a disturbingly accurate parody of TV Zone.

Tides 15 (Michaelmas 1994) – a new academic year and the first artwork cover for some time. The Grief Encounters fiction strand is in full swing, and sees the fifth Doctor, Nyssa and Tegan return a panda to an old friend and Mrs Barbara Chesterton attempt to interest a problem class in the Aztecs and finds one student would have blown Tlotoxl up with Nitro-9. 1980s Doctor Who is reassessed and found wanting.

Tides 16 (Hilary 1995) – a familiar cover design but the new editor has yet to change out of their predecessor’s outfit. There’s something going down in Perivale with horses and cats. The Devil never keeps his promises. Zoe cannot be blamed for the disaster that is The Dominators. And don’t forget, when the new serving wench comes in, tell her to peel the potatoes.

Tides 17 (Trinity 1995) – the new editor has found their outfit and there’s a hatstand on the cover. OED editors are dared to beat causality. ‘The people who run the show serve themselves and the people who have been diligently watching since 1963.’ What does one writer feel so much better for giving up? Which series did not last long enough for its reputation to be tarnished by repetition and banality? Time paradoxes are debated, while James Robert McCrimmon suns himself by the Thames Estuary.

Tides 18 (Trinity 1995) – an older scan first uploaded some time ago. The editor lays into Doctor Who‘s standards of archaeology – thank goodness they hadn’t seen Bonekickers. The Doctor meets Shakespeare and tells Robert Cecil that a potato is more likely to cause a rent in the fabric of space and time than any other root vegetable. Out on Fandrozani, the missing episode smugglers are waiting. How far was the fifth Doctor the first female Doctor? An admirer of the New and Missing Adventures worries about oversupply.

Tides 19 (Trinity 1996) – one year later, and Paul McGann’s movie has just hit a stunned fandom. ‘It is a triumph,’ says the editor, ‘balanced on a knife edge between plot and technology, fan and fresh eyes, Who and glossy American SF’ and challenges us to review our attitudes to Doctor Who in general. Doctor Who tie-in fiction is compared to its Babylon 5 and Star Trek equivalents. (BIG NEON SIGN: HERE IS THE MESSAGE. DON’T MISS THE MESSAGE.) There’s a sideswipe against a columnist from then new-kid-on-the-rack SFX. There are worries about Philip Segal’s ‘kisses to the past’ and nostalgic fondness for old-fashioned videotaped studio drama, and a suggestion that what we already have from Doctor Who, new series or not, is already more than enough to wish for.

Tides 20 (Trinity 1997) – another year over, and a new editor lavishes display fonts all over the magazine for one of the most baroque issues ever. Nicola Bryant stares seductively out of one page while Peri is tied to a stake screaming on another. There’s a fascinating article by an American student on ‘Winners and Losers of Cult Television’ – but which series is loved by his friends but he finds ‘refried pulp’, ‘as exciting as watching a sick cow die of a venereal disease?’ Better-loved is a series where most of the leading characters are sociopaths with no time for ‘namby-pamby moralising’. The continuities of Star Wars and Doctor Who are compared, and we meet ‘Gothic Phil’ Hinchcliffe along the way. McGann’s Doctor arrives in the universe of Crime Traveller and runs rings round Holly and Slade. Lance Parkin’s A History of the Universe is praised, Babylon 5‘s Shadow War assessed as if it were fit for the pages of The Cambridge Ancient History, and the Valeyard reassessed in the light of the later New Adventures and the TV Movie.