‘ “Great balls of Fire!” said the Doctor, and floored the accelerator. One more time? Oh, he hadn’t even started yet.’ 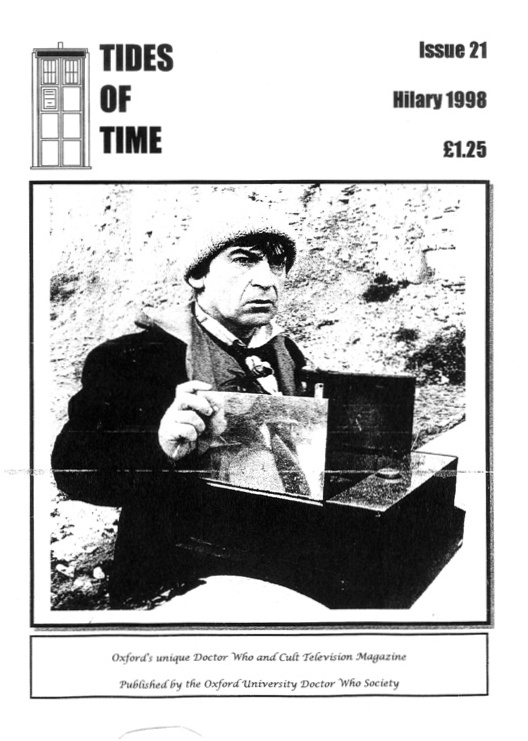 I’d hoped to have finished uploading the entire Tides of Time back catalogue by now, but work and other essential matters of life have intervened. Since my last post I have added two more old issues as PDFs to the online library. They are both from 1998, the first two issues of Tides to be edited by Matthew Peacock, and the beginning of a period of vigorous collaboration, ever more outrageous opinionating, a growing interest in other television series to which the cult label had been applied, and enthusiastically reproducing pseudonyms. Links and summaries below. Both are somewhat large files so right-clicking is recommended; the originals were photocopies of inkjet masters but were of a higher standard than many; I have done a minimal amount of clean-up.

Tides 21 – Sydney Newman memorialised, the Bodleian Library’s Doctor Who holdings examined, The Claws of Axos defended, and First Frontier reworked. The state of Babylon 5 is surveyed. The seventh Doctor goes looking for a new coat.

Tides 22 – Get Smart! is celebrated; The Tenth Planet, Logopolis and Ghost Light are discussed; and the first Short Trips and the state of the BBC Books range a year after its launch are investigated. The first version of Fiona Moore’s Gay, Lesbian and Bisexual Guide to Doctor Who is published. The third Doctor decides to make the most of what time he has left between his encounter with the Queen Spider and his regeneration; the second Doctor and Jamie find something nasty in a very particular nursery; and there is a now happily outdated list of BBC Film and Television Library Doctor Who holdings.