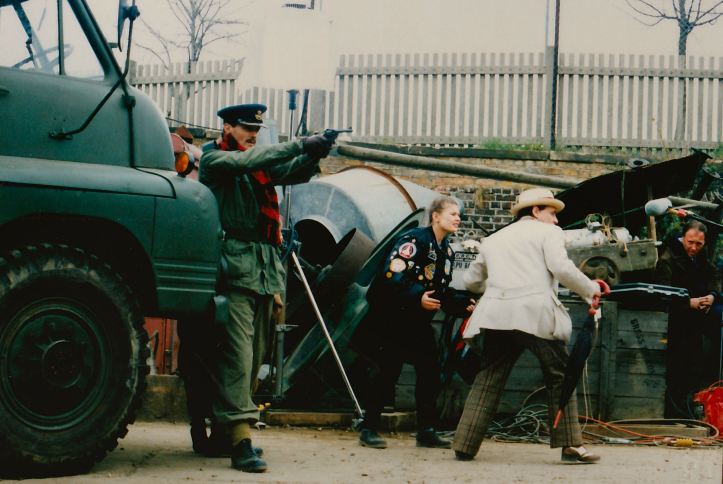 Image Description: Filming on the set of Remembrance of the Daleks

“Oi, Dalek! It’s me, the Doctor! What’s the matter? Don’t you recognise your mortal enemy?”

Remembrance of the Daleks has been my favourite story for many years now, and I’m aware that this is hardly an original choice (“What a predictable response,” as the Doctor might say.) Indeed, much has already been said about the story’s strengths, from its pitched battles to the night-time musings on decisions and their consequences, from sugar in tea to “Unlimited rice pudding!” Yet this remains the story I’ve watched more often than any other, and its popularity isn’t exactly hard to explain. This is a bold and intelligently plotted narrative, which announces a new direction for the show while paying homage to the past. Perhaps its greatest strength is that it can do this without becoming overloaded by continuity. In fact, I once showed part of this story to a couple of university friends who were only really familiar with NuWho; I was relieved to see that they enjoyed it, in spite of my worries about how they would react to the slower pacing and dated graphics. That the story still holds up, nearly thirty years after it first aired, is testament to its quality.

Remembrance is, of course, a very appropriate title for a story that not only touches on the values and prejudices of the 1960s but also engages with the show’s own history. Aaronovitch’s desire to portray a more proactive version of the Doctor leads to an interesting new version of the Seventh Doctor: one who is slightly more restrained, but not quite the Machiavellian chessmaster of the Virgin New Adventures. McCoy delivers a fine performance, conveying the Doctor’s frustration as his carefully laid plans begin to go awry (“I’ve made a grave error of judgment. Oh, I’m beginning to wish I never started all this.”)

As a long-time fan of the Daleks, however, I have to say that one of my favourite things about the story is its determination to reinvent them as a credible threat. There’s the famous scene where a Dalek is seen to climb stairs for the first time, of course, but I also appreciate the decision not to reveal Davros until the very end of the story. This allows the Daleks to stand on their own, and also adds a neat irony: in contrast to the end of Resurrection of the Daleks, Davros has now been subsumed by his own creation, being reduced to little more than a head in a jar. The fire fight at Totter’s Lane is also a highlight of the story. Rather than withholding the Daleks until the Episode one cliffhanger, as other stories had done, the story is quick to establish their deadly nature, making for a well-paced and memorable story. Thanks to location filming and a high budget, the conflict between the tank-like renegade Daleks and the sleek new imperial Daleks is superbly handled.

Yet this explosive action is counterpointed by a satirical commentary on the futility of military conflict. For the Doctor, Gilmore’s men are nothing more than an unwanted complication, which leads to one of my favourite lines in the story: “With respect, Group Captain, your career is magnificently irrelevant!” More importantly, the battle between Dalek factions feels like a pointed commentary on the arms race of the Cold War. The two factions resort to different tactics as they vie for supremacy, wheeling out super-powered Daleks or robbing human ingenuity, only for their conflict to end in ‘mutually assured destruction’ as both are wiped out. The Doctor is also quick to warn against a “military build-up”, asserting that the Daleks could simply “sterilise” the area if they pleased. There’s an obvious message here: in war, all roads lead to self-destruction. The point is made most clearly when Ace’s baseball bat finally disintegrates after the Doctor uses it to smash up the imperial Daleks’ transmat. “Weapons!” he scoffs. “Always useless in the end.”

The combination of exciting action with subtler themes was always something that drew me to this story; in fact, the Seventh Doctor era is among my favourites because of the extent to which it engages with contemporary social issues. Aside from the televised story, though, I greatly enjoyed the Target novelisation of Remembrance, which offers interesting new perspectives on the nature of the Daleks. For instance, it reveals that the Special Weapons Dalek has been driven mad by the backwash from its own weapon; as a result, it is feared even by other Daleks, who dub it “the Abomination.” Aaronovitch also presents the mental connection between the Supreme Dalek and the little girl as having unwanted side-effects, with their minds appearing to bleed into one another: “Strange, alien emotions were creating problems for its life support systems. […] For one vertiginious moment the Dalek Supreme wanted to skip.” There’s something disturbing about the way the Supreme Dalek is presented as increasingly confused and unstable, and this points to a key strength of Remembrance: it reminds us that the Daleks are ultimately living creatures, not mere robots.

There are plenty of other things to enjoy in Remembrance. Ace is given some good material, and there’s a strong supporting cast; I particularly enjoy seeing Simon Williams and Pamela Salem as Group Captain Gilmore and Rachel Jensen. In a story full of witty dialogue, Rachel’s quip about retiring to raise begonias is an underrated line. All in all, I’d be hard pressed to choose the best part of this story.

(We all know it’s the Special Weapons Dalek, though…)