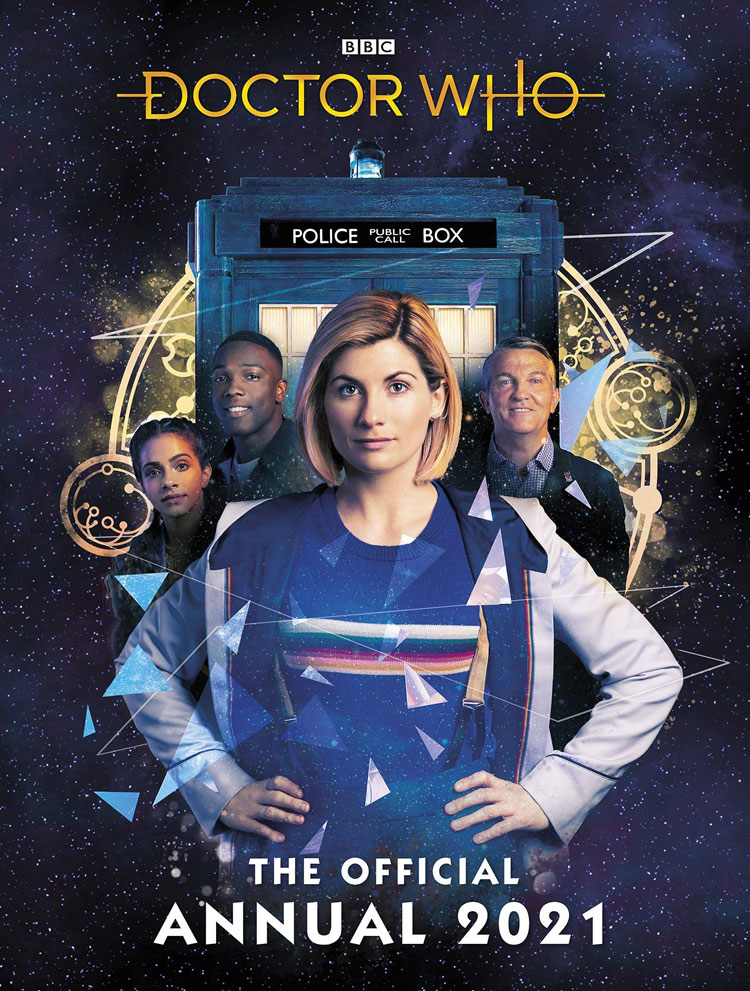 Image Description: The cover of The Official Doctor Who Annual 2021

Hello, and welcome back to Tides of Time’s ongoing reviews of Time Lord Victorious. John managed to survive an encounter with the Daleks last time, and has just arrived at the annual. Is he in for a more sedate experience? I’ll let him answer that one…

The yearly hardback annual is a beloved tradition going back decades, with the first Doctor Who example hitting shelves in 1965. The majority of this edition covers the 2020 series of Doctor Who, as well as the Resolution special from 2019. There are lots of familiar features – brief summaries of episodes, fact files on new monsters and enemies, and some fun games and puzzles, all surrounded by lovely photos and some high energy visual design. There is a disappointing absence of new content, however, with no short stories or comics to expand upon the Thirteenth Doctor’s world.
The Time Lord Victorious section takes the form of a faux newspaper, “The Dark Times Times”, produced by Melody Malone aka River Song, and functions as a brief explanation of some of its elements.

The highlight here is a two-page spread detailing the members of the Dalek Time Squad – I look forward to watching/reading/listening to them in action! From the shiny silver Time Commander, to the black-tinted, red-eyed Executioner Dalek, these are great designs, with distinctive but minor variations on the same basic grey model. They come across like a more refined version of the New Dalek Paradigm idea, with all the interesting narrative possibilities of distinct Dalek roles, without the controversial colour and shape choices. And I see that the Strategist from Defender of the Daleks looks set to become a squad member…

We also get some information on Brian the Ood, a figure that I think has already become a fan-favourite, and the Kotturuh, the new death-bringing race that look set to play a large role in proceedings. There’s also a two-page spread featuring species from the Dark Times that we’ve previously seen in Doctor Who, who appear to have had off-screen dealings with the Kotturuh as well!

At the end of the day, this is the traditional, overpriced children’s annual, but it does seem to be a competent example of the genre, with a good mix of personality, information and activities to complete. However, I can’t help but feel that it’s a little bit mercenary to essentially put a big sales pitch for your new, payment required Doctor Who range, in the middle of a book for children. It’s also a bit misleading to place it in the Time Lord Victorious “content roadmap” when it doesn’t really have any content in and of itself, just a summary of the other bits!