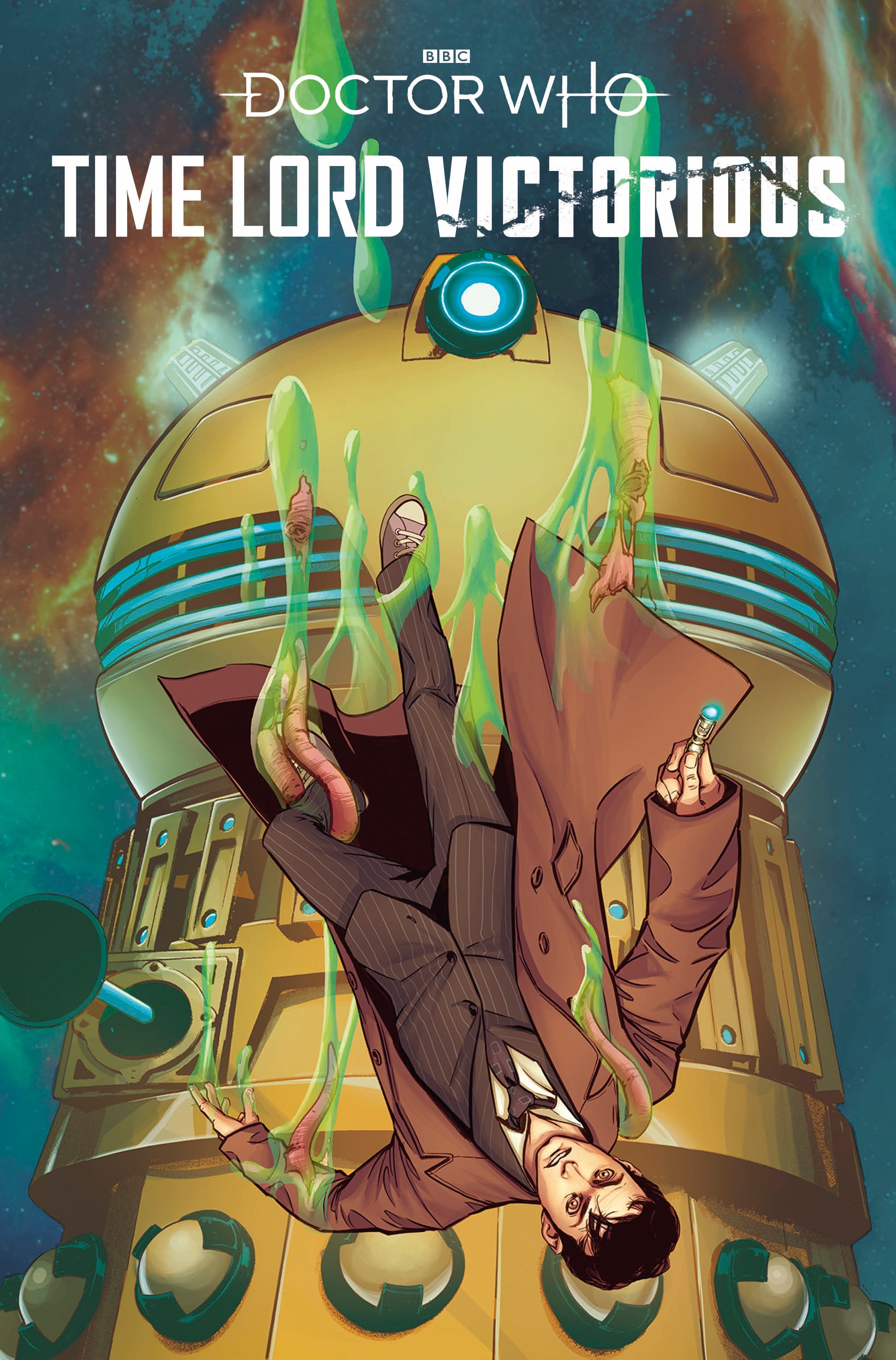 Image Description: The Cover of Defender of the Daleks #1

Name: Defender of the Daleks #1

Hello, and welcome back to Tides of Time’s ongoing reviews of Time Lord Victorious. With Escape Hunt’s content behind us, we’re now moving into the wonderful world of print! Take it away John…

Fresh from my own experiences vanquishing the Daleks, the next part of the Time Lord Victorious saga picks up with Defender of the Daleks, a two-part comic book adventure with the Tenth Doctor. While I’ll have to reserve full judgement until the second issue is released in October, how well does this introductory instalment get things started?

Wisely, the comic chooses to begin as a complete fresh start, with a mildly amnesiac Doctor cut loose from any ongoing plotlines in Titan’s main range (although this doesn’t prevent the inclusion of an entirely superfluous “Previously..” page), which is a godsend for new readers. Surprisingly, this is not the arrogant, time-bending “Time Lord Victorious” of the range’s title, but seems to be a more standard, crowd pleasing figure from earlier in this incarnation’s life. As he awakens to the distinctive signs of a paradox, and a squad of Daleks who have never heard of the Time War, there’s clearly a mystery afoot.

An awfully high page count is given over to the Doctor’s interception and recruitment by the Daleks for a special mission. While these scenes are entertainingly written and look gorgeous, it’s simply not that novel a situation, covering many similar beats to Asylum of the Daleks, and it means there’s a lot of exposition to get through before the (actually quite simple) main plot can begin, as a new enemy from the Dark Times threatens the universe.

Visually, the story reads like a Daleks’ Greatest Hits package, with plenty of iconic elements transplanted straight from the television series. From the warm, golden honeycomb interiors of The Parting of the Ways, to some ominous doors straight out of Victory of the Daleks, and culminating in a trip to Skaro fresh out of The Witch’s Familiar, it’s very clear this has been put together with a great deal of love for classic Dalek design.

The tinpot terrors themselves have had a bit of an upgrade, sporting a timeless grey and blue colour scheme, and soon we’re introduced to two new Dalek personalities, who look set to clash in the future. The bulbous Dalek Emperor looks delightfully decadent in full gold, with a smooth, shiny, spherical head, but far more interesting is the new Dalek Prime Strategist, a battered and rusting old plotter who’s been around so long his casing can’t even fly! There’s a nice hint of animosity brewing in the ranks and this has great potential to cause fireworks later in the saga.

On the whole I quite enjoyed Defender of the Daleks, which does an excellent job at retooling the beloved baddies for a new era, with smart design choices and spot-on dialogue, which never falls into the trap of sounding emotionless. But the fairly sedate plotting gives me some grave concerns for the future. If this were the first part of an ongoing series, I could happily praise it as a very strong introduction, but this is supposed to be half of the story, and it takes an awfully long time to get to the point. As it stands, I’m left worrying that not enough ground has been covered, and the second issue will be forced to rush to a conclusion.