All the Gateways, or None – Acceptance in Doctor Who fandom 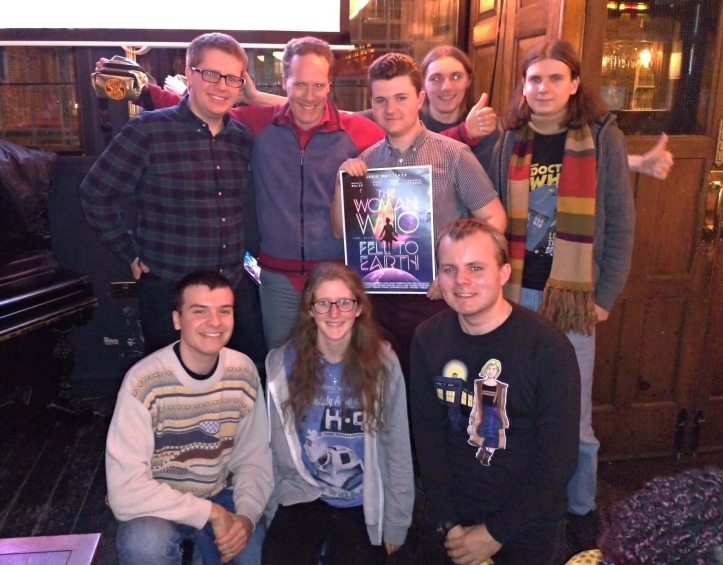 Image Description: A WhoSoc team at a past Quiz of Rassilon

Sunday evening in East London. Autumn is shedding its last leaves and displaying the sharp angles of winter. A few tall, bare trees contort over city streets, roadways variously armoured against the janis thorns of December rain according to their degrees. In a thrivingly edgy local which has seen more than its fair share of ducks and dives in its chequered existence, a quiz is taking place. The unwary might be taken aback by how loud it all is. Surely this is a subject which attracts the shy people? There must certainly be many loudly disputing the answers who would not be recognised here by their colleagues or classmates or perhaps even family. Others are more seasoned at projecting their voices and opinions and, yes, images too, for this is a culture which has its fair share of divas as well as dilettantes. There’s a ripple of outrage, some confected, at one host’s insistence that the colour of one item of the lead character’s wardrobe in one particular story can’t be one of the most popular answers. It carries on perhaps a little too long, and the realisation that it probably isn’t the host who has chosen the wrong hill to defend, but that loud section of the audience who don’t know their clothing technicalities, comes a little too late for many. The dynamics of the moment would take some reading, but those with ancient prejudices about this particular subculture would be confounded that the host defending her corner was a young woman, and that a lot of the participants were young women as well.

The event I’ve just recalled, in a very impressionistic manner which others will doubtless remember differently, was a Quiz of Rassilon held in London earlier this year. It attracts a large number of Doctor Who fans from anywhere within reasonable travelling distance of London; there are often attendees from Brighton, Cambridge, Oxford and probably further afield. The pub seems to do very well from it; I remember visiting a large convention several years ago, where the venue underestimated the taste for alcoholic and indeed non-alcoholic drinks shared by convention-going Doctor Who fans; at rather too early in a busy evening, the convention organiser was able to announce that we had drunk the bar dry, to cheers and groans. I doubt that the Sebright Arms, in that mysterious realm where Bethnal Green and Hackney are one (probably Cambridge Heath) has ever made this mistake. Likewise the Quiz of Rassilon overcomes the distinctions between ‘in’ and ‘out’ fans which I remember from a convention which I attended in the so-called wilderness years, when invitations and directions seemed to separate fans into upper and outer castes.

The confrontation described suggests that a fifth of the way through the twenty-first century, hierarchies in Doctor Who fandom are indeed much more fluid. The Quiz of Rassilon’s variety of questionsetters emphasises a churn of different authorities and backgrounds. The opening of the quiz to larger numbers of people through Zoom during the lockdown has widened participation and drawn attention to other online Doctor Who quizzes which have also had widespread support, including from people involved in the programme or its supporting media.

However, not everyone is exposed to the same social currents nor, if they are, knows how to navigate them. Since 2005, Doctor Who has been associated with success and modernity, and many of its young adult fans seem to me extremely accomplished people with successful careers in media, marketing and public relations. In experiencing Doctor Who across media since 2005, they have learned from the very best in their fields. For the middle-aged whose formative years were blighted by the BBC’s disowning of Doctor Who in the late 1980s, this is a curious reversal at best. However, for someone like me to generalise about all younger Doctor Who fans in this way is mistaken. I suggest that what we now have is a fandom of specialisms with their own hierarchies of expertise. It’s not surprising that with a diversified media and a golden age of Doctor Who products following the return of the series in 2005, that there are multiple ways of celebrating Doctor Who in 2020.

This should make gatekeeping impossible, but some people still try to invalidate others’ experiences of the programme. During the lockdown in particular, there have been some reprehensible conflicts on social media. In a programme which has evolved and changed as much as Doctor Who has over fifty-seven years, it is feasible for there to be people who emphasise different aspects of it, who specialise in different branches of the programme. It should be feasible for there to be mutual respect between individuals and groups with different attitudes. Fandom is inevitably personal. There is often going to be a sense of hurt when finding someone doesn’t like the same aspects of Doctor Who that you do. Likewise, there are dangers in overstereotyping; it is possible both to have been born around 2000, be interested in dressing up as contemporary Doctor Who characters, to have an encyclopedic knowledge of the 1990s New Adventures books, and watch reconstructions of missing 1960s episodes. I always hope that everyone can achieve sufficient perspective on themselves not to condemn others for being different, or to accept that expression of that difference isn’t an attempt to invalidate them.