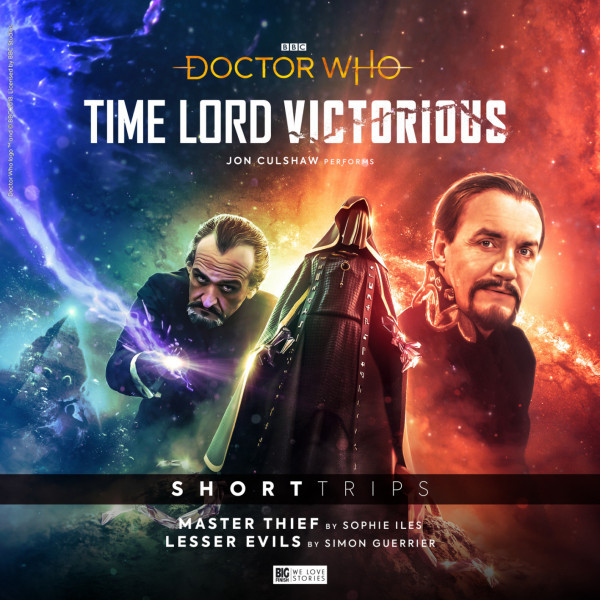 The second piece in Big Finish’s Master duology, Lesser Evils takes us right into the heart of the Dark Times, and sees the Anthony Ainley incarnation making a stand against the Kotturuh for the sake of a peaceful, tree-dwelling species. But surely he’s not truly making an altruistic gesture?

While the previous tale gave us the Master’s perspective, and made us privy to his thoughts and feelings, this tale instead comes from the point of view of a Kotturuh who has arrived to dispense judgement upon the many lifeforms of a lush jungle, with much of the introductory minutes spent acquainting ourselves with her before the Master even makes an appearance.

This approach pays off big in two ways. Firstly, it’s fascinating to get a bit more insight into an alien race we still don’t know too much about, and if this particular example is any indication, they’re not quite as impartial as they like to appear.

Haughty, condescending and at times, quite petty in her judgements, she’s a far more complicated character than I had expected, and the simmering antagonism that brews between her and the Master is intoxicating.

Secondly, by observing the Master from the outside, there’s an innate element of suspense to the story. When he’s vocally making a strong intellectual argument to support the indigenous species, you can’t help but wonder why. Much like his Kotturuh rival, the listener is constantly trying to second guess him, and work out just what his angle is. She’s the one with all the power, literally able to kill him with a touch, yet there’s always the sense that the Master might pull something out of the bag…

Yet again, Jon Culshaw’s ability to channel the Master is uncanny, this time presenting the patient, almost theatrical precision of an older Master, seemingly post-Survival. Like all the best liars, the Master cloaks his intentions in half-truths – he seems to harbour some genuine admiration for the native people and it never seems entirely impossible that he might truly want to protect them. His arguments in their favour are meticulous and without overdue sentiment, quite consistent with the way his mind works. Does the Master have a hidden agenda, or is he genuinely showing some of his better nature? You’ll have to listen to find out…

Lesser Evils is a patient, thoughtful Short Trip that takes the time to really get into the heads of its two main characters, and makes an excellent counterpart to the more outwardly eventful Master Thief. I would definitely recommend this double pack even if you have no interest in the wider Time Lord Victorious saga – Master Thief contains no obvious connection, and this tale is a tidy side story that complements the ongoing arc without requiring all the details, and functions extremely well in its own right.