The Ghost of Fandom Past, the Light of Fandom Future – The changing face of Doctor Who fandom 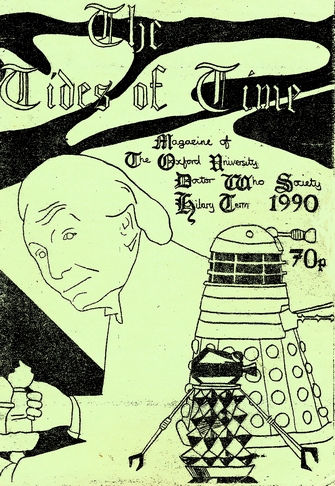 Image Description: The cover of The Tides of Time #1

I will be fifty this year and, if I am counting correctly, Tides of Time has just turned thirty.  When I started this article, I wanted to write something about my perceptions of old fandom (or at least middle-aged fandom) versus young fandom. But, in fact, something that strikes me ever more strongly as I get older is the extent to which my experience is not necessarily that of the majority, let alone of that of the fans who grew up with the 2005 version of the show.

It’s also between thirty and thirty-one years since Ghost Light aired.  Bear with me – this is relevant.

There are a lot of us who grew up in the 1970s and 1980s and whose fandom experience coalesced in particular around Doctor Who Monthly, later Doctor Who Magazine.  We learned to think of fandom as mostly male, mostly middle-class, mostly about gathering production information, constructing story summaries and collating a certain set of points of accumulated fan wisdom, a particular mythologising of the show’s own history.  Perhaps, more fundamentally, we viewed fandom as a hegemony.  Obviously, some of us preferred the books to Big Finish’s output, or thought Sarah Jane a better companion than Leela.  We were allowed to have divergent views of the Seventh Doctor era, which gave us an illusion of diversity, but we had more fixed views about the Fourth Doctor.  We knew there were fans in America but assumed their experience was the same as ours in all the ways we thought that mattered.

Perhaps more importantly, we obtained something like a heliocentric view of fandom. DWM was at the centre, orbited by a number of other bodies of varying size and importance such as Big Finish, Outpost Gallifrey, and Paul Cornell.  As we moved into the wilderness years, we understood being fannish about Doctor Who to include being fannish about fandom.  We were, mostly, already collectors and cataloguers.  It became natural to think not just in terms of what was important in the show but also what was important in fandom. Like Light in Ghost Light, our conception of the space of understandings of the show;- understandings of fandom; the ways in which it could change and the ways in which it would not – were, in retrospect, narrow and rigid.

Obviously, some have reacted to the challenge to this worldview worse than others.  I’m not particularly interested in those responses that have descended rapidly into a firestorm of misogyny, racism and gatekeeping around the concept of a ‘true fan’.  I don’t want to downplay the distress and harm caused by these people, but I don’t want to dignify that kind of response with analysis.

Nevertheless, this worldview had been challenged.  The relevance and importance of DWM is no longer clear; the medium for fannish messaging has been radically democratised.  We no longer have a solar system, but a galaxy.  There are a thousand suns, so many I could not even name them all, around which minor bodies orbit.  Even a galaxy is an inaccurate metaphor since these groups merge and interact.  My fandom remains middle-aged, with an experience anchored in the Doctor Who of the 1970s and 1980s, but much of the fannish material I consume now comes from North America and Canada.  Much of it is produced by women, and much of it finds DWM tangential, if not irrelevant, to its experience.  It is hard to claim this corner of fandom is representative even of the middle-class UK-based fans of my own age.

I am comfortable with where I’ve found myself, but I am still frequently disconcerted by the awareness of other parts of the fandom.  In particular, as is the way of the middle-aged, I build in my head an image of the ‘young fan’ and find them often incomprehensible.  In my mind’s eye, the typical young fan is Beth Axford of the Time Ladies,  even though I suspect there is a tranche of even younger fans following on behind her.  Beth is unashamedly glamourous, where I never was, and brutally open about her feelings in a way my generation rarely could be.  She seems fun and brash and irreverent.  I admire her immensely and yet I find her hard to identify with, even as I’m aware I probably know nothing about her at all.  Again, as I suspect is the way of the middle-aged, at least those who have decided not to turn into frothing misogynists, I imagine inducting these ‘young fans’ into the club with patrician dignity.

There is an ongoing experiment, or perhaps series of experiments, in DWM to do precisely this.  An early manifestation was a remodelling of the Time Team to include a cast of ‘young fans’ watching individual episodes. I was never much of a fan of the Time Team articles anyway, but this manifestation of it seemed even more baffling.  The revelation early on that Christel Dee claimed to watch twentieth-century episodes at 1.5x speed had me clutching my pearls, along with a large segment of fandom, but the cheerfulness with which these people revealed ignorance of Doctor Who‘s history was disconcerting. Obviously this reaction can transform easily into gatekeeping, but more fundamental is the realisation that not only are these people not part of the old club, they have relatively little interest in being part of it.  They have their own way of being fans.  My condescension in inviting them in is exposed in its irrelevance.  I think DWM is beginning to find better ways to preserve its relevance, being both more welcoming to diverse voices and less self-congratulatory.  I’m not certain though it can, or even should, attempt to regain its position of dominance.

Meanwhile, other fandoms flourish and do their own thing.  The imaginary young fandom in my head, that looks like Beth, seems to be fun and yet, at the same time, I know it isn’t me. Being that sort of fan would exhaust me! I find myself standing on one side of the glass looking in.  I would, I am sure, be welcomed in if I pushed open the door, but I’m not sure I would feel I belonged any more than the new Time Team appear to have felt they belonged in DWM.

Middle-aged, middle-class UK fandom was about hegemony fueled by completism.  We catalogued and collected and documented.  Fandom has evolved in spite of us, however. As a result, I hope we can find a way to be like Redvers, Control and Nimrod: celebrating our differences, revelling in our capacity to change and be content to explore the universe together without the need to understand and catalogue every last molecule.  Most of us don’t really want to fan like young fans any more than young fans want to fan like us, but that shouldn’t mean we can’t travel together in our love of the show.