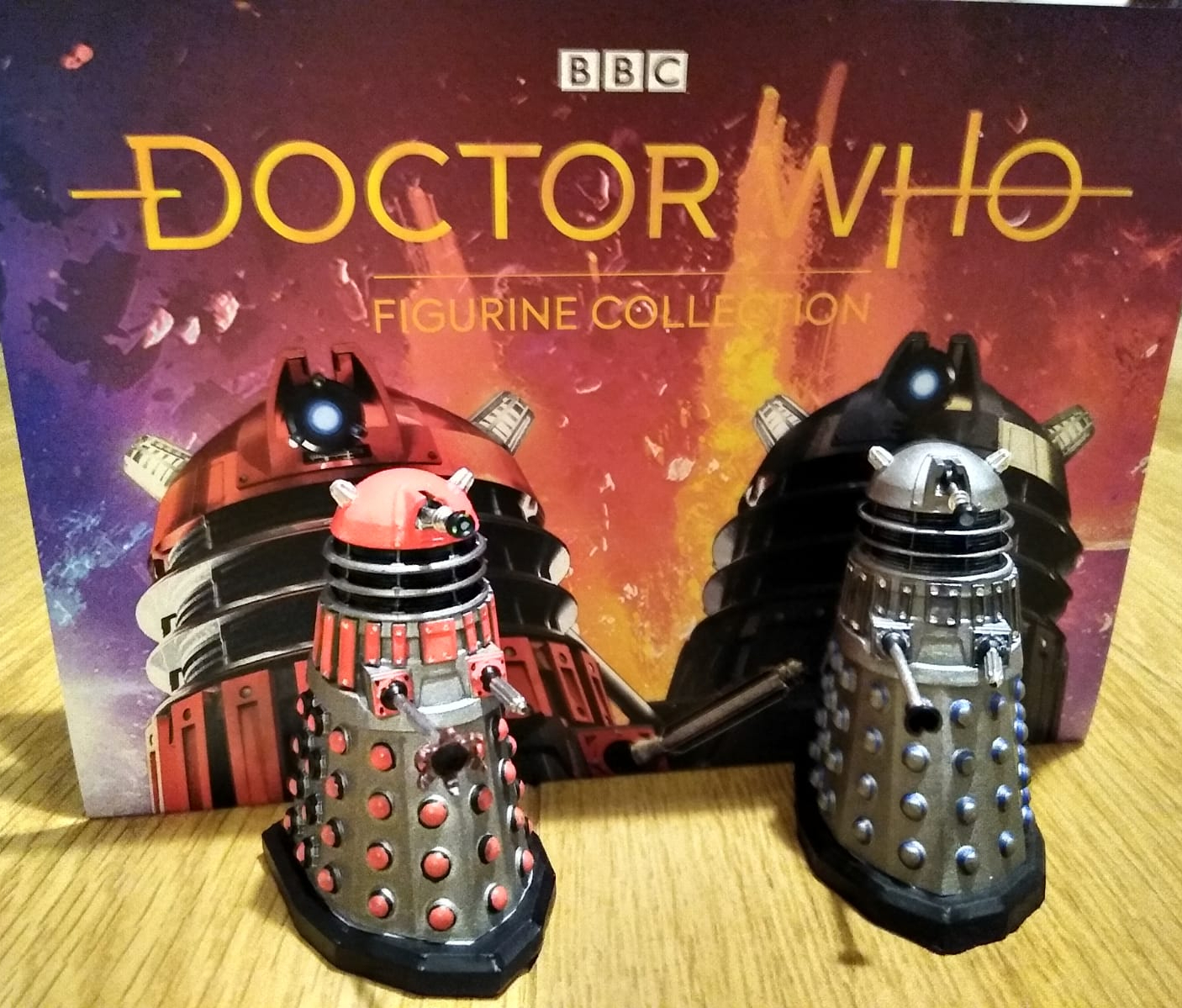 This second pair of tiny tinpot terrors adds two more terrific titans to my fledgling Dalek Empire – the Dalek Scientist and Dalek Time Commander. As an extra treat, this time the makers have produced the descriptions on the back of the box in Old High Skarosian, so you too can experience the thrill of the Dalek language… Wait, I’m being told that apparently this isn’t Skarosian script, but instead somewhat embarrassing placeholder text that never got replaced. Oops!

The models are (unsurprisingly) of the same high quality and finish as those from the first collection, with the highlight this time being the Dalek Scientist. As well as sporting a bold red dome, slats and ‘Dalek bumps’, he’s also got a outstretched claw arm instead of a plunger, and some interesting bevelled rims around his side-rear roundels. He’s quite an attractive fellow.

Comparatively, the Dalek Time Commander is a bit of a bore – he’s entirely silver, apart from blue rims around his roundels. The standard Dalek Drone from the first set is quite similar, but with entirely blue roundels which stand out against a lighter silver body. From a distance, it’s hard to tell them apart, which is bizarre given the Time Commander’s high rank – and frankly, I think the Drone looks better.

It’s very strange that the Scientist should have so many interesting design features compared to the Time Commander – if anything, the Scientist is the one who looks like he should be in control, especially as red has long been associated with authority in the Dalek Empire. However, I should still stress that while one of the designs may be less impressive, the figurines themselves are excellently made.

The accompanying magazine is just as good as the first instalment, delivering plenty of juicy nuggets about the Dalek Restoration Empire, and informational snippets about Doctor Who history. On the very first page of text, an interesting connection is made that I haven’t seen elsewhere – apparently the entity that so plagued the Daleks in, well, Daleks!, was a servant of the Hond from the Defender of the Daleks comic. My only concern here would be that quite a lot information contained within the magazine is a spoiler if you haven’t yet read/listened to the referenced stories – so perhaps don’t make this figurine set your first venture into the Time Lord Victorious world. For example, the magazine notes something quite shocking and revelatory that happens near the end of All Flesh Is Grass – and you would probably prefer to experience that first in context rather than as a dry factoid.

On a similar note, the short story included in this issue, Mission to the Known, is less a tale in its own right, and more of an elaboration of a scene from the aforementioned novel – and again, this is a moment from quite far into the book, so I really would recommend acquiring it prior to this! As the Dalek Time Commander is forced to reconsider his plans, and potentially be exterminated for a perceived failure, he receives his Emperor’s new orders, while the Dalek Executioner waits, ready to kill his superior if required… It’s an atmospheric piece that well captures the Dalek perspective, but requires too much contextual knowledge to be particularly entertaining as a standalone story.

While this set has a few more minor niggles than the previous figurine release, the fact remains that the Dalek models contained within are still a source of great delight and will be mainstays of my living room long after the rest of Time Lord Victorious has blown over. I eagerly await the third set, which looks set to be a double A-side release with my two favourite Restoration Empire Daleks together – the Strategist and Executioner!