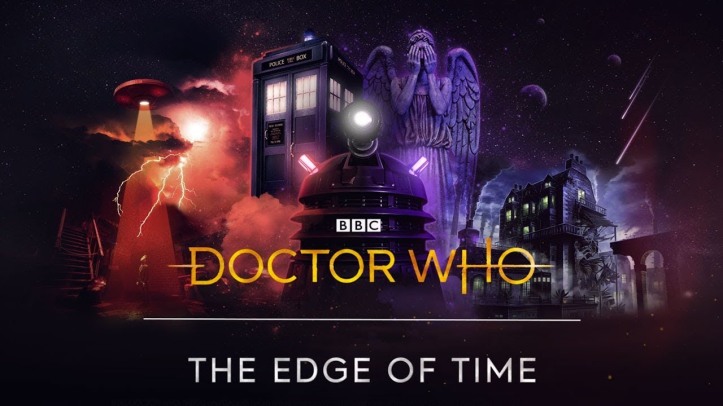 Image Description: A promotional image for The Edge of Time

VR fan and non-Whovian Rachel Rowlands becomes the Doctor for a while as they review The Edge of Time. Warning – spoilers ahead!

Doctor Who has a long history of attempts to make a game based on its lore. Whether that is through any number of board games; The Adventure Games; Doctor Who: Legacy; or the recently released The Lonely Assassins, there are plenty of options for those who want to step into the Doctor’s shoes. However, there are fewer that actually let you enter the world of Doctor Who, with VR being a recent development in interactive Who gameplay. Following The Runaway, The Edge of Time promises to expand the medium into previously unexplored territory, bringing back classic monsters on a galaxy-spanning quest. Sadly, in pursuit of this grand adventure, The Edge of Time lost sight of what being a game is really all about.

From the get-go, I was pretty unsure as to what sort of game this was. The opening sequence shifts between a narrative-adventure game and a puzzle game, with just a touch of horror to spice things up, so I guess it’s like a pretty standard Doctor Who episode in that respect. However, it became quickly obvious that the game developers were also unsure as to what sort of game this was. It’s a puzzle game with barely any puzzles – and even fewer good ones. It’s a narrative-adventure with a frankly odd structure and unconvincing plot. And, at the end, the game designers inexplicably (but not unwelcomely) decided to make it a first-person shooter. So, it’s about four different, poorly executed, games rolled into one. Let me go through the opening sequence to explain what I mean.

At the start of the game, you’re minding your own business in your local laundromat when, for some reason, the Thirteenth Doctor turns up on the TV screen and tells you that they’re stuck at the end of time and space, and need you to go get some time crystals (i.e. the MacGuffins) to rescue them and save the universe from a computer virus (not really, but that’s the metaphor they use). Then you glitch forward in time and the washing machines are suddenly full of incubating monsters. While the monsters don’t actually do anything, there is genuine tension in the horror element. Each arc (‘Laundromat’, ‘Spaceship’, ‘Angels’ and ‘Temple’, as I shall call them) has its own monster, and some of the monsters are genuinely creepy – especially the Weeping Angels.

You then go through the back door into an office with a locked safe. The Doctor voiceover tells you that you need to open the safe; this is your first flavour of the puzzle-solving element. As a good little puzzle-solver, you start to look for clues. But no sooner do you begin your search when the voiceover tells you that you need a four-digit code. Then the voiceover tells you to look on the back of pictures. And then the voiceover tells you to look at the picture in the other room. At that point, you realise that this isn’t actually a puzzle game because the voiceover literally tells you how to solve everything before you have the chance. Unsurprisingly, the random messages on the backs of the photos are the code to the safe, which doesn’t make sense, and inside is the sonic screwdriver, which makes even less sense! You leave the laundromat, do some extra bits and pieces, and end up in the TARDIS. On a side note, Daleks also seem to be taking over the world while you do this, but that doesn’t really factor in yet. That gives you a pretty good impression of how the game continues.

In a story with a MacGuffin, usually the MacGuffin – while being the reason the plot is happening – is actually pretty secondary to the story itself. We’re not so interested in the random thing that the protagonist has to find or take somewhere or throw in a fiery volcano or whatever. Rather we’re here for the stuff that happens while they do this, and the game developers were clearly aware of this. However, we still expect the general arcs of the story to have some bearing on the MacGuffins. What’s in the briefcase in Pulp Fiction doesn’t matter, it’s that the characters all want whatever it is which creates a good story. But such expectations exceed the reality of this game. Following the Laundromat arc, the next is about aliens on an abandoned spaceship who need constant love and attention otherwise they turn into monsters, like evil Instagram influencers. Does this, in any way, intersect with the ‘end of the universe’ plot or our need to get the time MacGuffin (beyond the crystal being on the spaceship for no intelligible reason)? No. It could have been any other story arc with a time crystal involved and would have worked out exactly the same way. The game itself seems to realise this, with a number of different and otherwise-pointless plot threads that, in the end, are all resolved simultaneously and are never to be heard from again. The only other seeming pay-off from this first arc is the acquisition of Emer, who is basically your guide/voiceover for the next bits. However, the Doctor was already fulfilling this role until this point, so it makes no difference at all. The voice changes. That’s it. That’s not to say that the abandoned spaceship plot is a bad one in and of itself. It’s got a decent story and at least one genuinely engaging puzzle, but the whole thing is just not relevant. And the resolution is rushed, ending not with a boss battle but a Doctor monologue, as if the developers realised they needed to tie in the overall plot right at the end. It’s all just slightly disappointing.

The next arc is a bit better though, tying into The Talons of Weng-Chiang for some reason. It’s also got the Weeping Angels that I definitely didn’t have nightmares about. Trust me, they were pretty scary on-screen, and in VR they are so much worse. The puzzles in this area are conceptually more innovative, if not necessarily well-executed. One in particular has a bizarre and illogical solution which, for once, has you thankful for the voiceover explaining exactly what you have to do.

However, this is all made up for by what follows. Following an angel jump-scare, you descend into the catacombs where you have to escape from a hoard of the things. Though the spaceship arc had some pretty decent jump-scares, they’re nothing compared to the angels. I hated them. They were great. It took me many attempts, and much swearing, to finally escape from them. The puzzle-element above left something to be desired, but the catacombs was probably one of the best bits of the game – a true blend of gameplay and story.

But even this is eclipsed by my favourite arc: the Temple. Unlike the spaceship arc, it had actual narrative sense and build-up, while introducing you to the Daleks and getting progressively more difficult. It may have given me a bit of tonal whiplash when it suddenly switched from an adventure/puzzle game to a shooter, but I rolled with it and it was decently good fun. The shooter part made for a nice change of pace, though the functionality could be improved. You can’t control where you go and there is a timer to reload, with no ability to dodge. As a result, you die a lot, and this gets a little tiresome. There is a reward at the end of this arc, however, with a proper ending which also has some relevance to the overall arc, tying into the invading Daleks from the laundromat and the virus.

At last, you have all three crystals. It’s time to face the big boss. In this case, the big boss is the ‘mother’ – the creator of the universe. She has decided that we’re awful people and so, instead of re-evaluating her parenting skills, she decides to kill us all instead with the virus. Logically, her first move was to kidnap the Doctor. Or so we are led to believe. The reality is more convoluted, and frankly unnecessarily so. The game then tries to pull the rug out from under you and only succeeds in tripping itself up. It turns out that most of the narrative so far was completely irrelevant to the actual way to defeat her, which involves what I will call ‘tiny pyramid powers’. The crystal MacGuffins turned out not even to be MacGuffins but just random things that you and no one else were interested in. To be honest, if they hadn’t gone for this plot-twist ending, I probably would have rated it higher, but it really brought me crashing down following the otherwise enjoyable temple arc. This is all then capped off by the revelation that not only has the Doctor misled you throughout, but they have also scapegoated you – an innocent bystander – and pretty much destroyed your life. But hey, you made some new friends, which makes up for it, right? Right?

While you ponder your new life, is also worth mentioning the technical side of the game. There are some solid pros, but they can get overshadowed by the often-irritating cons. On the plus side, there were subtitles, which isn’t always a given, but they were very necessary as the music overwhelmed much of the dialogue. It was also difficult to see at times, with a lot of the scenes being quite dark. At least it made these subtitles easier to read! Aside from sound and vision, touch could also be an issue, with the hand control being quite imprecise in places and sometimes you just can’t pick things up at all. Although it was decent on the whole, it did not allow for much of the dexterity and precision that other games have. There was also a sitting function. However, this made no adjustments to the gameplay itself, meaning you keep having to stand up or readjust your seat to reach things – something I can see as potentially being a real problem for someone who is physically disabled.

That is not to say that this game has no merits. It would have gotten one star if that was the case. The acting is genuinely pretty good, and there’s a bunch of references to other Doctor Who stories. While the story arcs don’t all make narrative sense, they are at least decently entertaining in and of themselves, and there are some good puzzles to be had. Despite this, the overall storytelling and confused game design really let down the atmosphere.

In all, I think the game developers managed to create what they set out to make: an episode of Doctor Who. However, it’s very much more an episode than a game, with the developers seemingly not have wanted to compromise that format to make it more playable. If you’re there for the Doctor Who experience, you could probably forgive the faults in the game itself. But if you’re there for the playability, it leaves much to be desired.