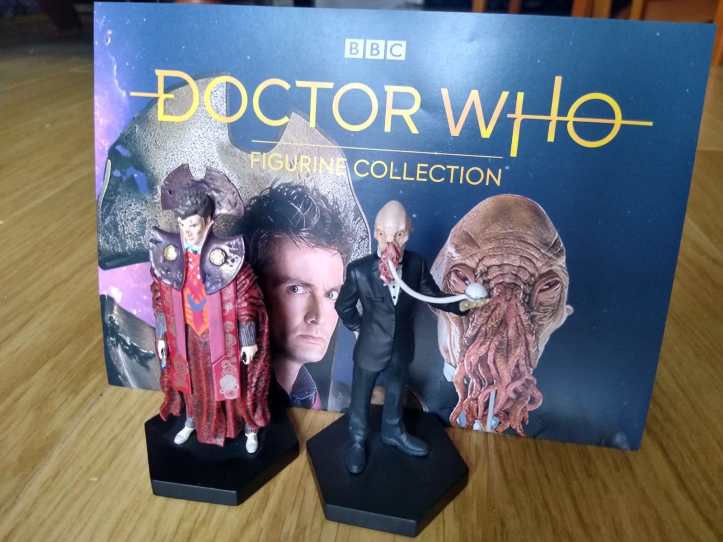 The fourth and final set of Time Lord Victorious figurines from Eaglemoss sees them stepping out from their Dalek-y comfort zone and providing a pair of humanoid figures. These are the Time Lord Victorious himself (aka the Tenth Doctor in some snazzy Gallifreyan robes) and his not-so-faithful companion, Brian the Ood.

Let’s start with the more successful figure. Brian the Ood’s simple, sharp, signature tuxedo looks absolutely fabulous here, with pocketing details and wrinkles in all the appropriate areas. His face is well contoured and coloured, with some exceptional sculpting successfully creating the illusion of multiple tentacles around the mouth. Brian’s pose is also a delight, as he stands, one hand behind his back, looking every inch the perfect servant – though from his appearances, we know better.

The Tenth Doctor model is also very detailed, but, due to the busy nature of the design and a fairly standard pose, feels like it has less of a personality. While recognisably the Tenth Doctor, the face (understandably) doesn’t really look like David Tennant. Without the intense gaze shown in the official TLV artwork, his standard face-forward position conveys no particular emotion. The Time Lord robes and collar, meanwhile, are well-painted and convincingly distressed, with the pinstripe trousers and Converse shoes beneath a well observed-touch. Unfortunately, due to the small space present between the model’s face and adjacent collar, the inside of the garment is painted in the same skin tone out of necessity. Ultimately, while I like this figure, I don’t love it the way I do my Daleks or my new Ood friend.

This time around, the accompanying magazine keeps things simple, but this is by no means less effective. While there are none of the snazzy CGI models or infographics that stood out in previous issues, what we get instead is something TLV aficionados like myself are liable to find much more interesting – interviews with literally every writer to work on the project. These cover everything from the novels to the animated series, and provide lots of fascinating tidbits into the production process, such as how various lockdowns have shaped the saga. Some standout pieces of trivia include that the Master-starring Short Trips (Master Thief and Lesser Evils) were initially conceived for the Alex MacQueen incarnation, and that plans for ten episodes of Daleks! were shortened to five, leaving room for a continuation…

While there are (yet again) more grammatical errors in this issue than I would expect, focusing on the TLV writers feels like an appropriate way to end this series of short magazines. If the upcoming Time Fracture and Echoes of Extinction hadn’t been delayed by the ongoing pandemic, this release would also have been the last piece of TLV content as a whole, and highlighting the creators would have been the perfect farewell.

As someone who has had no particular interest in collectible figurines beforehand, I have been really impressed with the build quality of this collection, with the whole range now proudly displayed in my living room. The magazines, while short, have also proven far less disposable than I had originally feared. While I don’t see myself making the leap to Eaglemoss’ ongoing main Doctor Who range on a regular basis, if they’re of the same calibre as this set, I can recommend them to the curious, and will keep my eyes out in case a specific sculpt captures my attention in the future.