Doctor Who: Flux – Once, Upon Time – Reviewed! 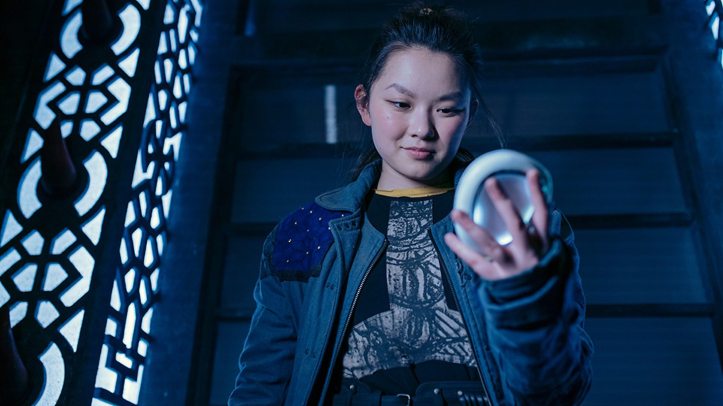 Image Description: Bel on her quest across the universe

Speculation and surpises in store as Victoria Walker reviews Series Thirteen’s third episode – and warning – there be spoilers ahead!

Once, Upon Time was an exciting third installment to the six part Flux extravaganza following War of the Sontarans. It mirrored The Halloween Apocalypse in many ways but was overall a far more satisfying narrative. We were introduced both to new elements of the Doctor’s past, and to elements of the future to come. Some questions were answered, but in true Doctor Who fashion, far more was raised in the process.

We start the episode more or less where we left off: with Swarm being generally menacing and the Doctor attempting to formulate a plan to save the day. Frustratingly, however, this is quickly put to one side as we are quickly catapulted into another story with a character called Bel. The Bel strand of this episode is a particularly egregious example of Chibnall’s tendency to set up a mystery only by posing the question: ‘What on earth is going on?’ It only pays off at the very end of the episode, whereas good mysteries in Doctor Who are usually more subtly posed. Take The End of the World, for instance. It is made pretty clear what is going on and the mystery in the episode comes from who is causing it to happen, rather than its occurence. Chibnall is very lucky I enjoyed the brief interludes with Bel and seeing the aftermath of the Flux.

Back with the rest of the cast, we have a few different storylines. Unexpectedly, Vinder manages the most interesting storyline as he is assigned to work for the mysterious Grand Serpent. He is the only prominent figure in any of the time streams who retains his appearance in his entirety, suggesting his plotline is set to return and audience recognition is important. Though it was at times uncomfortable to watch, the society he lives in was fascinating to experience, apparently having knowledge of TARDISes which suggest it isn’t human. We have seen in Classic Who that there are societies of humanoids that deal with the Timelords, like whatever species Dastari was in The Two Doctors – he certainly is not human. Given Chibnall’s affinity for bringing elements of eighties Classic Who into the modern era, it is possible that Vinder could be from that same Third Zone. Whatever the case, now he’s left the TARDIS, however, I’m not sure how Vinder will be reintroduced in a satisfying way.

Upon reflection, it becomes clear why Yaz appears as certain faces in Vinder’s time stream. The only other character who has faces organically removed from their stream is the Doctor, and it is made clear this is because her time in the Division was scrubbed from her memory. Could it be that whoever was in the room with Vinder and the Grand Serpent when the dodgy dealings were taking place has been removed from his memory? His commander has not been fully removed, however, so it may be that he has simply forgotten what they looked like as the years have passed on his tour aboard Outpost Rose. Alternatively, Bel asking if Vinder ‘still looks the same’ suggests that he may be from a species with regenerative abilities, so his commander may look like someone he no longer recognises.

After a wild ride through the time stream, the end of the episode still has surprises. We are presented with the idea of things being from not just outside our universe, but outside all universes. I believe that the old woman who chastised the Doctor for playing in her timestream (credited as Awsok), is an extra-universal being, as are Swarm, Azure and the Mouri. This leaves open the opportunity for the origin of the timeless child to be revealed, alongside the nature of the universe itself. Awsok’s scientific surroundings suggest the possibility of an experiment being run, perhaps with our reality itself.

All in all, I thought this was a very exciting episode if a little scattered. Unlike The Halloween Apocalypse, it felt a lot tighter with all of the storylines feeling full and purposeful. Bel’s story showed the state of the universe after the flux. Yaz’s and Dan’s stories made sense of what was happening in the episode. Vinder’s story explained why he was on Station Rose in the first place, while The Doctor’s story delved into some key elements of her background and raised some questions that have been thoroughly entertaining to gnaw on. We did have a return of that strange 1820s gent, Joseph Williamson, who continues to be puzzling. Once, Upon Time continues an upward trend in the quality of Flux, and leaves me interested for chapter four: Village of the Angels.