What’s That Chumbly Noise? – Galaxy 4 at The BFI Southbank

Image Description: Peter Purves chats to Justin Johnson on stage at the BFI

It feels like some four hundred dawns ago that we had some newly animated William Hartnell episodes. But it’s actually been much longer, since that would be The Tenth Planet Episode Four animation released on DVD on 18 November 2013 – two thousand nine hundred and eleven dawns if you’re speaking Drahvin. However, 7 November 2021 marked the premiere of something not yet seen in the Classic Doctor Who DVD & Blu-Ray range: an all-new colour animated reconstruction of an entire (and mostly missing) first Doctor serial. A nearly packed-out house of fans, considerably more than those who attended The Evil of the Daleks premiere three months before, gathered in the NFT1 auditorium to see the finished result.

It’s probably fair to say that Galaxy 4 wasn’t the most-requested serial by fans to be animated in full. It’s not fondly remembered by the cast and crew, particularly Peter Purves who has made no secret of how dissatisfied he was with the material provided to him in rehearsals. Its soundscape is fairly sparse and indistinct, the serial having had no incidental music composer, meaning it didn’t gain much appreciation when released as a narrated soundtrack in 2002, especially compared to the likes of The Macra Terror or Fury from the Deep. Nor are its ‘monsters’ even that noteworthy within the show’s illustrious history; so much so that we didn’t even know what a ‘Rill’ looked like until the serial’s third episode was recovered a decade ago. Meanwhile, the Chumblies themselves seemed destined to belong in the bargain basement of Dalek knock-offs alongside the Quarks and the Mechonoids. In summary then, Galaxy 4 does not have much kudos going for it. On the other hand, it’s an opportunity for the animators to use this to their advantage, capitalising on the lower-than-usual expectations and spearheading a reevaluation of the serial among the fandom-at-large. But have they succeeded?

The most impressive part of this new four-part animation for me was the bright, bold colour palette on display with lush, detailed backdrops and scenery throughout. The nameless planet of Galaxy 4 almost certainly didn’t look this rich and expansive in the original 1965 production. It simply didn’t have the money, the time, the technology or even the studio space to achieve this. Hopefully it is this visual aspect that will help sell the animation to people outside the dedicated fandom, and even international broadcasters, in order to help fund future animated reconstructions.

Director Chloe Grech and her team of animators have also taken significant liberties with the surviving source material. One early scene that exists in a surviving clip now illustrates a flashback of how the two spaceships crashed onto the planet, whereas originally this was simply a scene where Maaga, leader of the Drahvins, delivers exposition to the cast. The other Drahvins, who are meant to be clones, now all look identical and have had some costume tweaks, such as the addition of 60s knee-length go-go boots. The Chumblies also look livelier, and dare I say ‘cuter’, compared to the original 1965 production as well as a bit more sophisticated within the addition of a flexible claw arm. The shot compositions are also more dynamic than Big Finish Creative’s previous 2D animation, 2020’s Fury from the Deep, which at times simply opted to have all the characters stood in a horizontal line.

Occasionally though, there were changes not to my personal satisfaction. One that stood out for me was a surviving moment in Episode One where chief villain Maaga claps her hands and thereby causes a Drahvin in the background to suddenly sit up straight, making for a nice touch of visual comedy. But in the animation, this is ignored on screen – Maaga does not clap her hands nor does the Drahvin react to her but the sound is still very much present. I’ll happily admit this is an incredible piece of nitpicking on my part, but when Gary Russell defends using the entire off-air soundtrack without any cuts (which is a valid choice) then this decision comes across as somewhat careless.

If there’s one thing within the animation itself that induced winces from the audience then it would be any of the long shots showing the full-bodied characters running from one side of the screen to the other. This is not a new criticism, and is present in other animations, but at least The Evil of the Daleks managed to minimise this to one shot early on in the story. Galaxy 4, on the other hand, has no shame in repeating this shot throughout the serial’s duration. I am not an animator, so perhaps I have no right to comment on this, but it still amuses me to no end that this continues to be the most challenging aspect of animating missing Doctor Who episodes.

Aside from the screening itself, and a short but sweet introduction from Maureen O’Brien, there were also two sets of Q&As. The first one took place during the half-time break between episodes two and three as audio maestro Mark Ayres, concept designer Ioan Morris and Executive Producer Gary Russell took to the stage. The highlight of this discussion was definitely Mark Ayres brandishing the collection of off-air recordings made by fans during the original broadcasts which has made these animated reconstructions possible. Mark even had the specific tape that contained the audio used for the Galaxy 4 animation made by the wonderful David Holman. It turned out that David was present in that very audience and received a warm round of applause from the entire audience.

The second Q&A occurred after the screening and saw the BFI’s stalwart Justin Johnson chat to Peter Purves, who of course played companion Steven Taylor. Peter spoke copiously and enthusiastically about his time working on the show, although he did occasionally lose his train of thought. In particular, Peter recounted how he got to play the part of Steven Taylor through striking up a good working relationship with William Hartnell during Episode Three of The Chase, in which he played the supporting role of Morton Dill. This led to Hartnell and O’Brien requesting he continue on the show in a regular role to help ease the departures of William Russell and Jacqueline Hill. Thanks to his association with the show, Peter still gets regular work acting in original Doctor Who audio dramas made by Big Finish Productions as Steven and the First Doctor.

The event closed out with a signing opportunity with Peter where attendees could also collect an exclusive postcard of the cover art for the Galaxy 4 DVD/Blu-Ray release, as per previous BFI screening events for the animated reconstructions and The Collection boxsets. 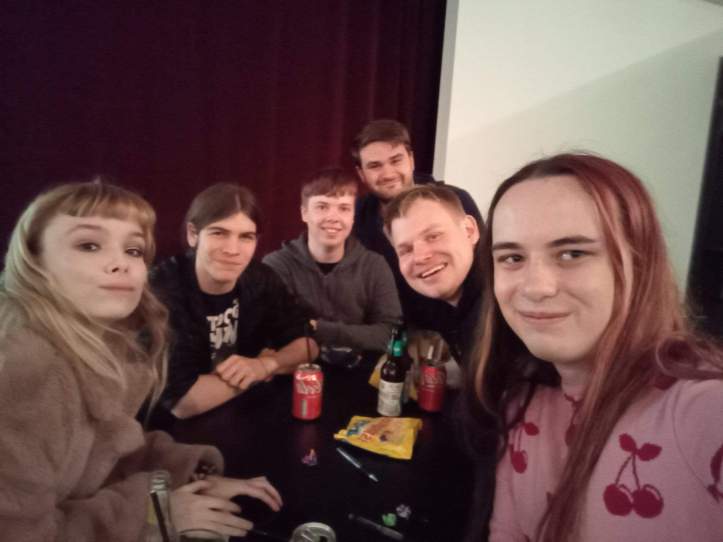 Image Description: The winners of November 2021’s Quiz of Rassilon

Some lucky fans, including myself, also attended the soft in-person relaunch of The Quiz of Rassilon, now situated in the BFI’s Blue Room. The quiz featured rounds on The Halloween Apocalypse, Galaxy 4, as well as a ‘Bastard round’ presented by Gary Russell, which had a considerable number of groans and heckles from the audience. I was even fortunate enough to be on the winning team, consisting of myself, Bryn, Max, Ben, Jay and Rebecca. Our success meant we became the proud recipients of an annual BFI membership, a bookazine collection of 1960s Dalek comics and the all-new ‘NFT of Rassilon’ – a digital replacement for the ‘bumbag of Rassilon’ that was previously awarded to winning teams. You might say that we were utterly thRILLed to win.

When all is said and done, I cannot deny that myself and the audience present had an enjoyable time seeing the first public showing of Galaxy 4 in quite some time. There was raucous laughter when William Hartnell fluffed a line in the opening TARDIS scene, and when Maaga proudly announced that a few Drahvin men are kept for breeding whilst the rest are culled. There were also sympathetic coos from the audience as a Chumbly drooped into a lifeless state. And perhaps there was a sense of awe at the spectacle of the planet exploding at the serial’s climax, even if the surprise is given away by the episode title:  ‘The Exploding Planet’. All-in-all, Galaxy 4 is not a high watermark moment for the animated range of reconstructions but it does the job well enough. It will make for a welcome addition on your DVD or Blu-Ray shelf, and I hope that it should make for an excellent stepping stone towards the future Hartnell-era animations yet to come.