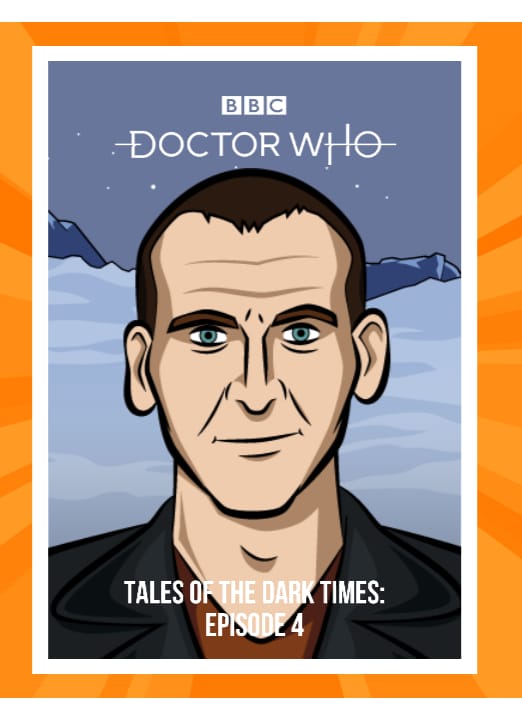 Image Description: The Ninth Doctor in the Comic Creator

When I started reviewing these content packs for the Comic Maker app I was highly sceptical of them, expecting a throwaway product designed to earn a quick buck. But I can’t deny that I’ve been somewhat charmed by the simple renderings, earnest plotlines and appropriately miniscule purchase price of each release, and am quite sad that I seem to have reached the end of the Time Lord Victorious packs – if, indeed I have! I haven’t been able to find a schedule for these releases anywhere, so don’t be surprised if future packs materialise just to make me look bad!

This final pack gives you three characters to pose for your amusement – the golden Emperor Dalek (completing the Dalek posse), an original vampire woman named Ikkala, and the Ninth Doctor. However, the Doctor model is the same as was available in the first pack, which is a bit of a disappointment, though I suppose could be useful if you’re picking and choosing specific packs rather than forking over for the lot. Rounding out the pack are some ice planet backdrops and props for enlivening your artistic creations.

The accompanying comic sees the Ninth Doctor and Ikkala (whoever she is) trekking across an ice world (for some reason) when they’re attacked by a cold-loving creature, that in the comic’s own words has “not bothered evolving a shape”. One suspects these comics’ writers can sympathise.

While obviously I don’t expect a lot from these comics given the price tag, this one isn’t good, and neither is it inadvertently funny enough to be memorable, although the Doctor revealing his “sonic stake” has a damn good try. Will we see the mysterious Ikkala make an appearance in any future releases? I honestly haven’t a clue.

So we bid adieu to the Comic Maker with a bit of a damp squib, but it still can’t be knocked for 99p. I’ll carry fond memories of this range for the rest of my life, be it the Tenth Doctor performing jazz hands with Brian the Ood, the Eighth Doctor staring into my soul, or the time they couldn’t be bothered putting together a comic page and so created a scene set in total darkness. These may be Tales From The Dark Times, but for me they’ll always be Sales For The Good Times.